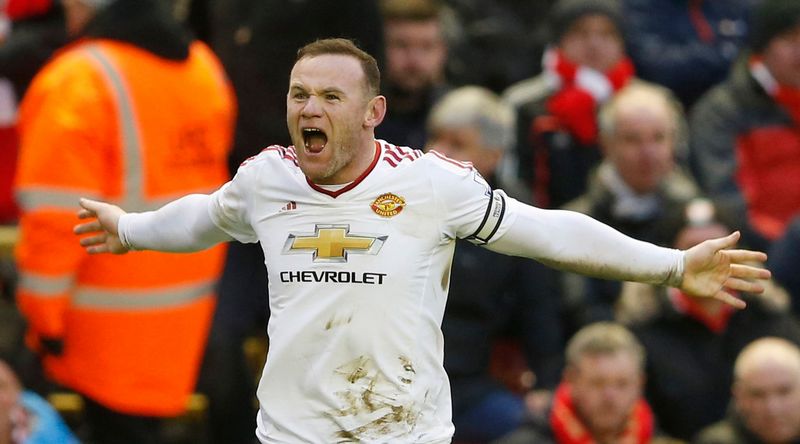 Wayne Rooney netted Manchester United’s 100th Reds goal against Liverpool at Anfield as Louis van Gaal’s men claimed a famous late victory over the Merseysiders.
The United captain struck with 12 minutes left when he smashed home from close range after Marouane Fellaini’s header had come back off the bar. It’s fair to say the hosts dominated much of the 90 minutes, but the Reds grew into the game after half-time before Rooney struck the killer blow, although it must be said that David De Gea was once again outstanding.
Louis van Gaal kept faith with the starting XI that played out a 3-3 draw against Newcastle United four days earlier, with the only change to the matchday squad being Guillermo Varela replacing James Weir on the bench.
United had won two of the last three league meetings at Anfield, including last season’s Juan Mata-inspired victory, while van Gaal had enjoyed three league wins from three against the Merseysiders since his arrival. Both sides came into the match in mixed form and it seemed strange for a United/Liverpool game equating to a match between sixth and ninth in the table. 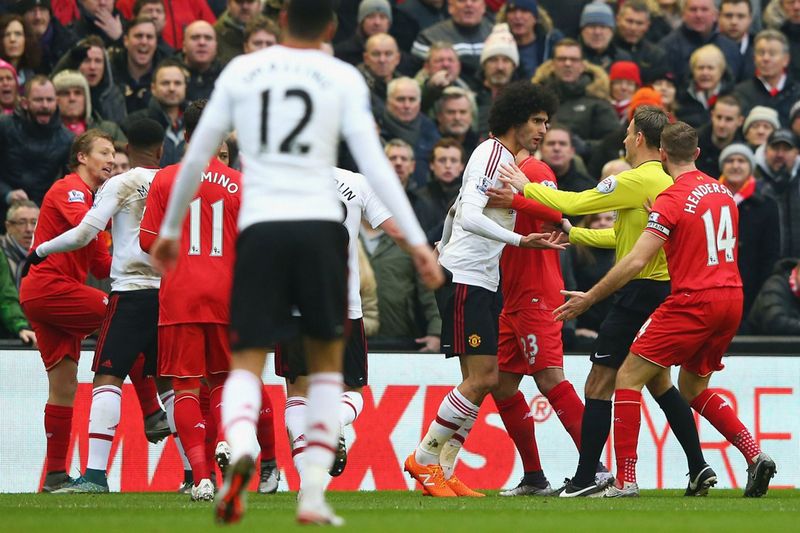 It was the hosts who had the first sight of goal on 10 minutes, following a cagey opening. A ball over the top from Lucas found Adam Lallana, who tried his luck with a header as De Gea sprinted from goal. The Spaniard got a strong hand to the effort and was relieved to see Roberto Firmino drag a follow-up shot wide with the goal gaping. James Milner blasted over soon after, while tensions were raised between the sides after Fellaini and Lucas clashed twice in quick succession. 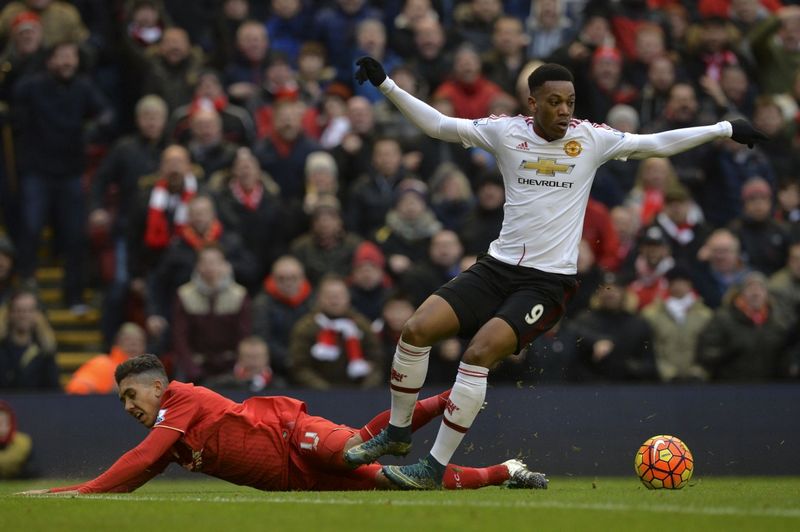 The Reds were quiet as an attacking force with Liverpool enjoying the best of the few opportunities in the first period. Captain Jordan Henderson had one of those on the half-hour mark but his cross-shot, after being flicked in by Firmino, flew wide. Firmino found himself through on goal with half-time approaching as Liverpool broke from a United corner, but Anthony Martial got back brilliantly to take the ball off his toe.
Cameron Borthwick-Jackson replaced the injured Ashley Young just before the break as Liverpool finished the half on top.

Possession: Liverpool 51% United 49%
Shots at goal: Liverpool 7 United 2
Shots on target: Liverpool 1 United 0
Corners: Liverpool 0 United 2
The second period began as the first finished with Jurgen Klopp’s men dominating and five minutes in Emre Can almost broke the deadlock after powering past Chris Smalling but, thankfully, De Gea saved with his legs.
At the other end, Martial had United’s best chance of the game so far on 56 minutes after the Reds worked the ball well. Borthwick-Jackson’s cross eventually dropped to the French striker, who dragged a shot just wide of Simon Mignolet’s left-hand post. The chance sparked encouragement in the away end, which featured the watching Phil Jones, Michael Carrick and Marcos Rojo, as the Reds gradually worked their way into the match. 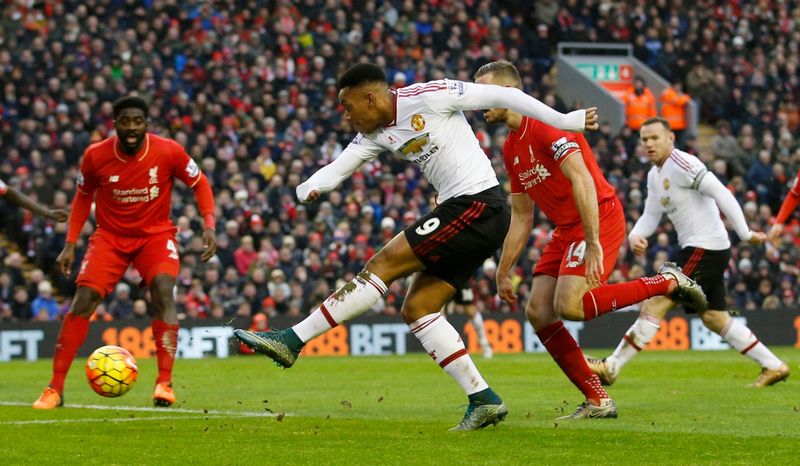 De Gea still needed to be alert at the other end and soon after last season’s Anfield hero Mata had replaced Jesse Lingard, the Spanish stopper pulled off a brilliant double save from Can and Firmino.
Memphis Depay’s arrival, in place of Ander Herrera, prompted a tactical reshuffle as Martial went up front with Rooney switching to the no.10 role, and Memphis and Mata flanking them down each side. 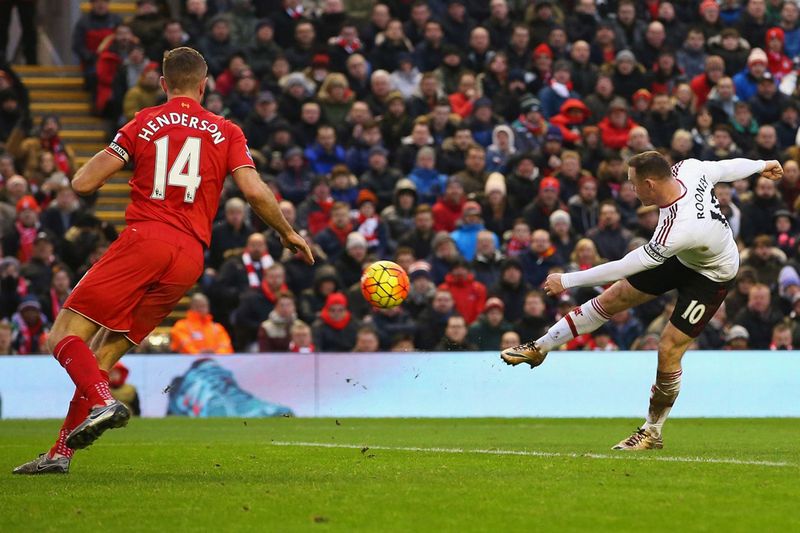 After playing such a key role in this fixture last season, Mata turned provider this time as the Reds looked to stage a smash and grab. His cross from a short corner landed on Fellaini’s head and after the ball smacked against the bar Rooney was there to blast home into the roof of the net. It was the striker’s fifth goal in four games and it also meant Rooney has now scored more goals in the Premier League for one club than anyone else, edging ahead of Thierry Henry to 176.
The Reds survived a couple of scares late on, but held out for another important victory with none sweeter than against our great rivals.

"To score the winning goal at Anfield, it’s been a long time since that happened for me, since my first years here, so I’ll be selfish and enjoy that one the most." - Wayne Rooney

"In the first half it [the gameplan] didn’t work because we only survived. Liverpool were better, more aggressive. But in the second half we kept the ball better and that is why we came into the match, created chances and scored through Wayne." - Louis van Gaal

"Anfield is always a nice atmosphere especially in a derby match. We could feel it was a special moment and we are very happy to finish with the win." - Morgan Schneiderlin