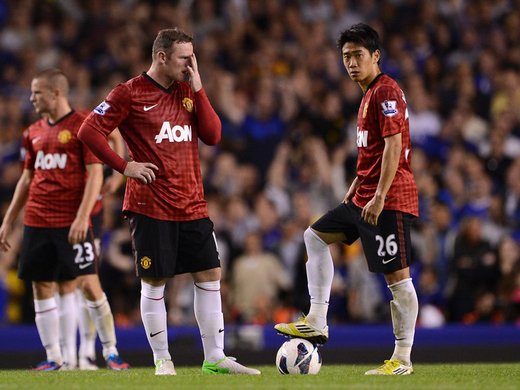 The Belgian created havoc in United’s makeshift defence and scored the only goal of the game on 57 minutes to inflict opening-day defeat on the Reds for the first time since 2004.

Fellaini’s exploits – he won almost every header and dragged the Reds centre-backs all over the pitch – outshone even the debut of Robin van Persie, who was sent on as a substitute with 22 minutes to play.

Try as he might, the Dutchman couldn’t engineer an equaliser on a night when Everton’s route-one tactics proved too tricky to handle for a defence robbed by injury of Rio Ferdinand, Phil Jones, Chris Smalling and Jonny Evans.

That meant Michael Carrick and Antonio Valencia had to slot into a back four that also contained, in Nemanja Vidic, a player who hadn’t experienced any competitive football since 7 December 2011.

Perhaps, then, it was no surprise Everton enjoyed so much success in the final third. Even before Fellaini rattled the woodwork on 14 minutes the hosts had caused mild panic in the Reds’ penalty area from Leighton Baines’ accurate set-piece delivery.

By the half-hour mark, Nikica Jelavic and Steven Pienaar had drawn smart saves from De Gea; United, meanwhile, could boast only of a curling Wayne Rooney free-kick that Tim Howard helped around the post.

Everton’s approach – get the ball forward quickly to Fellaini and feed off the knockdowns, deliver crosses close to De Gea – was predictable but effective. From one hopeful lump forward the ball was half-cleared to Pienaar, whose shot from the edge of the area snuck through a crowd of players and was heading for the far corner until the Spaniard reacted quickly and pushed the ball to safety.

He had to make two other outstanding stops before the interval – one after another Everton high ball found Fellaini’s curls and Leon Osman swivelled to fire goalwards, another when Baines’ free-kick looked destined for the top corner – as concern in the Reds camp grew.

Ninety-nine sleeps had passed since Sir Alex’s men suffered heartbreak on the final day of last season and it seemed that, for long periods at Goodison Park, memories of that tumultuous day were still weighing heavy on the Reds.

Certainly, the free-flowing attacking football many expected barely surfaced, although Shinji Kagawa looked sharp on his debut and United could actually have gone into the break ahead had Danny Welbeck and Rooney finished half-chances. Instead, United had to graft in the middle of the park and grapple with Everton’s awkward aerial tactics.

David Moyes’ men employed a similarly direct approach in the second half and within three minutes of the restart the Toffees had clattered the crossbar after Fellaini – yes, him again – cushioned a header at the far post and Osman connected sweetly from 10 yards.

Fellaini then rose highest - out-jumping Michael Carrick six yards out - to meet Darron Gibson’s corner and power Everton into a 57th-minute lead. It was a fabulous finish and just reward for Fellaini's performance; the only surprise was that the goal didn't come sooner.

United almost equalised when a spot of pinball in the Everton penalty area ended with Tom Cleverley’s shot being cleared off the line by Phil Jagielka. The England defender was solid all evening and made a number of timely interceptions and blocks, much to the chagrin of United's travelling support.

Van Persie’s introduction midway through the second period boosted spirits among those supporters and almost led to a goal on 79 minutes when he crossed low for Kagawa at the near post. Tim Howard shot bravely off his line, however, and his clearance cannoned off the Japanese for a goal kick.

There was to be no dream debut for either summer signing. Instead, this was a chastening experience for Sir Alex’s men and a reminder that life in the Barclays Premier League – even at Manchester United and especially when Everton are the opposition – is never easy.