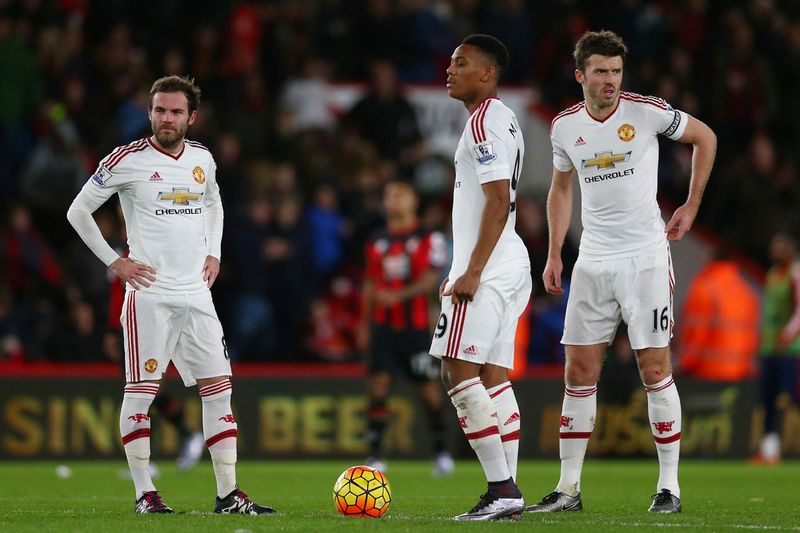 Manchester United's seven-match unbeaten run in the Barclays Premier League came to an end on Saturday with a disappointing 2-1 defeat at Bournemouth, where Jesse Lingard was also added to a worryingly long list of injured players.
Goals from Junior Stanislas and Joshua King outweighed Marouane Fellaini's strike to secure victory for the Cherries, who are flying high following last weekend’s victory at Chelsea. The Reds, meanwhile, will drop out of the Barclays Premier League top four if Tottenham beat Newcastle on Sunday. 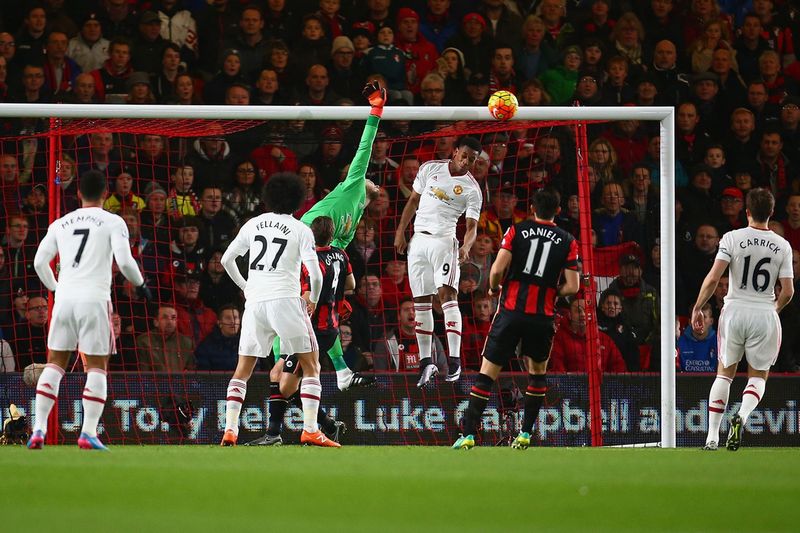 United – without the suspended Bastian Schweinsteiger and seven injured players before kick-off - made a slow and disappointing start by conceding in just the second minute. Junior Stanislas unleashed a corner from the right wing that caught the wind and sailed over David De Gea into the top corner at the back post, much to the delight of a rowdy home crowd at the Vitality Stadium.
The Reds responded positively to falling behind and almost restored parity a few moments later as Artur Boruc made a terrific double save to deny Marouane Fellaini and the recalled Paddy McNair. Anthony Martial then spurned another opportunity when sent through on goal by a wayward Bournemouth pass, as the French striker could only drag the ball wide of Boruc's right-hand post. 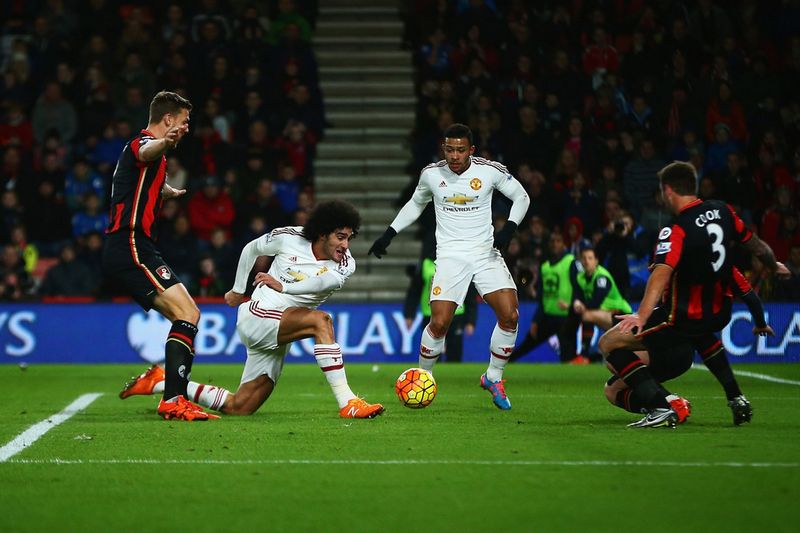 After De Gea did terrifically well to claw possession away from Stanislas when the forward was through on goal, United deservedly drew level through Fellaini as the Belgian pounced on a loose ball to bound past Boruc and finish from close range after the keeper denied Memphis. The ecstasy of that goal was quickly tempered, however, when an injury to Jesse Lingard forced him off for Andreas Pereira on 31 minutes.
Neither side truly threatened in the final exchanges of the half with the only real moment of note being a yellow card for Pereira, who flew into a rash challenge with Stanislas. Had the young Brazilian caught the goalscorer, he may have received a sterner punishment from the referee Anthony Taylor.

Possession: Bournemouth 41% United 59%
Shots at goal: Bournemouth 6 United 6
Shots on target: Bournemough 3 United 3
Corners: Bournemouth 3 United 3
United’s travelling fans on the South Coast may have experienced a sense of déjà vu at the start of the second half, as the Reds started slowly again and conceded another early goal from a set-piece. King, the former Academy graduate who made two substitute appearances under Sir Alex Ferguson, did the damage, this time by escaping Daley Blind inside the area, to hit a calm finish past De Gea. 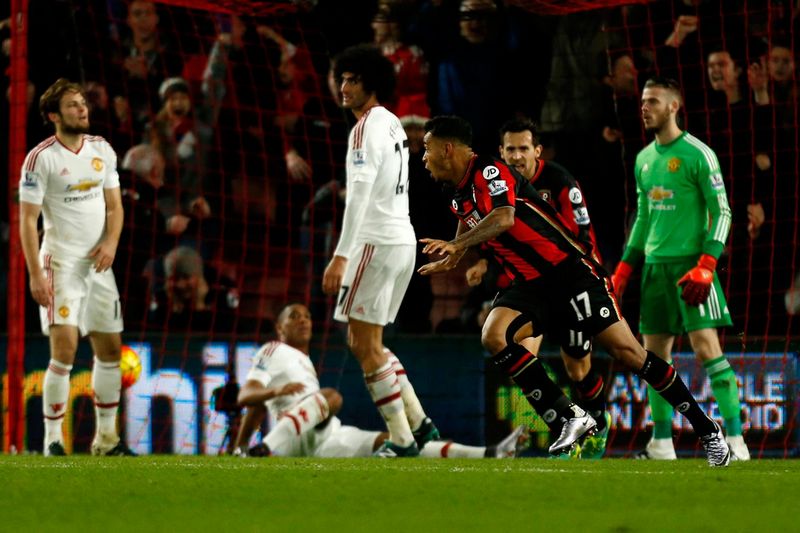 Fellaini saw a shot saved by Boruc moments after and he was frustrated again when a second effort from the resulting corner was blocked by a defender. King suffered an injury and was replaced on 64 minutes by Glenn Murray, the man who scored a famous winner at Chelsea just last weekend.
Bournemouth were in the ascendancy for much of the second half and the Cherries should have extended their lead on 71 minutes when Murray ran onto Dan Gosling’s incisive pass to round McNair and blast a shot over the bar from close range. Seconds later, the substitute wasted another glorious opportunity to score with a left-footed strike that flew well off target from the six-yard line. 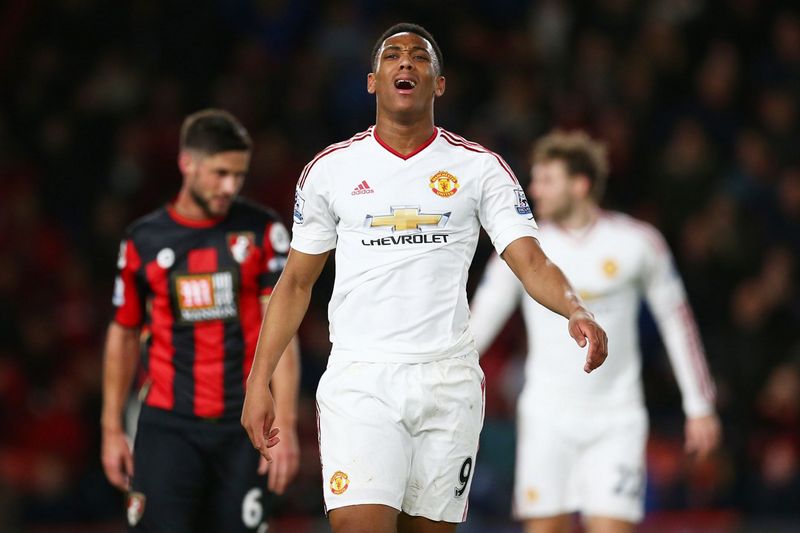 Martial flashed a left-footed shot off target as the clock ticked towards 90 minutes, but United never really threatened to level as Eddie Howe's held on to secure a famous win that also leaves the Reds with a win in five matches across all competitions. Next weekend's clash with Norwich City is now of great importance.

#MUFC's seven-match unbeaten run in the Barclays Premier League came to an end on Saturday with a disappointing 2-1...