Is number 20 waiting in the wings? 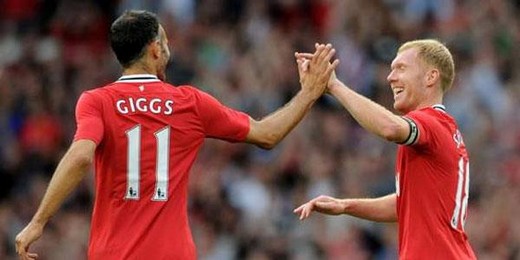 Sharpe and Giggs…Kanchelskis and Giggs… Beckham and… err Giggs, Ronaldo and.. you’ve guessed it, Giggs!

Even just considering the modern era, United’s most exciting sides have always had a wing pairing. A duo injecting that pace that gets you off your seat, skill that leaves full-backs dizzy, and positioning that stretches the pitch – decluttering the midfield quicker than Changing Rooms on fast forward.

It is the open spaces created by these partnerships that have enabled those unforgettable counter-attacks… the ones we still daydream about today. Attacks which flowed so smoothly, they could easily have featured on an advert for WD40!

As United fans we crave these flying wingers, and the flanks of Old Trafford have been graced with some of the greats. The 50’s saw Johnny Berry and David Pegg; the 60’s, George Best, and Johnny Aston; the 70’s brought us Sammy McIlroy, Gordon Hill and Lou Macari; the 80’s had Gordon Strachan and Jesper Olsen, and since 1993 we’ve had the pleasure of witnessing Sharpe, Giggs, Kanchelskis, Beckham and Ronaldo.

It is for these reasons that we often get more excited by the prospect of a wide pairing than we do about a frontline duo. Anything that sparks our inner nostalgia, (especially on a boring Monday afternoon), is something we grab at. And its for this reason, that an almost regulation 5-0 win over Wolves – or to use Sir Alex’s description, “an adequate win” – has left me salivating at the prospect of what might be about to take shape.

The performance of Antonio Valencia indicated he could be about to recapture the form he showed before the injury sustained against Ajax. His strength, pace and power make him almost unplayable when he’s on song, and as we have seen, his understanding with Rooney can be fantastically lucrative in transforming skilful wing-play into actual entries on the score sheet.

But for United fans, it is the combination with a kindred spirit that really gets the heart racing –that pair of bookends that extend the boundaries of the midfield, leaving opposition players struggling to plug the gaps. And we may just have stumbled upon the matching pair.

Early in the season Ashley Young evoked huge excitement. It looked as though we may have found someone who could provide quality from the wing for a whole new era. Playing on the left, he demonstrated great versatility, taking on players, but also to coming inside and producing, dare I say it, Ronaldo-esque shots.

Unfortunately injuries have meant that Valencia and Young have only started one Premier League game together, out of 29, but now, the prospect of trying this exciting combination is real. And the thought of United being as strong and dangerous down either side of the field is something that has my mind racing back to 1994. To the days when Kanchelskis and Giggs terrorised the league, as opponents struggled quell simultaneous storms brewing 90-odd yards apart.

Of course, I have to mention Nani. Undoubtedly skilful, with huge ability, but infinitely frustrating, the Portuguese winger has actually become the least productive of the three, averaging an assist every 3 games. Compare this to Valencia, who provides every 1.6 matches and Young once every 2.4.

I’m not suggesting that there is no place for Nani at United, and hopefully the challenge for his place will help him to focus on producing his best on a more regular basis, but there is something about the Valencia/Young axis that needs to be explored.

As with Beckham and Giggs in the late 90’s, their work going backwards is as valuable as the attacking force they provide. Having two wide, flair players with the work ethic to help out defensively is a rare find, and having the pair means Sir Alex doesn’t have to accomodate a luxury player, or sacrifice flair and attacking prowess for a more workmanlike member of the squad.

With nine games to go, United can’t deploy luxuries and hope for a spark. We need those who produce these sparks as part of their day-job, reliable workers who produce moments of genius.

Injuries may have prevented the true measure of this partnership being revealed, but the path may now be clear for them to be unleashed on the league…. And who knows, with the addition of the central midfielder we all dream of in the summer, maybe they could conquer Europe too.