Life begins at 40! Ryan Giggs reveals how Fergie is nursing him towards career milestone 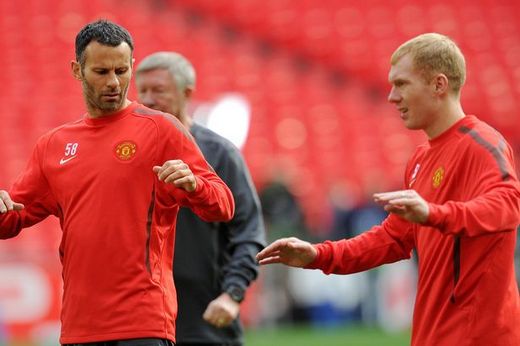 Ryan Giggs has revealed just how Sir Alex Ferguson is helping him hold back the sands of time and defy all football logic, writes the Sunday People.

The most decorated star in Premier League history has spent the last couple of seasons breaking records for fun.

And he claims Ferguson is ­nursing him towards a milestone as stunning as any in his career – being a Manchester United outfield player at 40.

That decision, says Giggs, won’t be taken until the season is over.

The veteran Old Trafford star will turn 40 next November and if he decides to stay on for another season when his contract runs out in June, he’ll join an elite group of golden oldies to play in the Premier League after their Big Four-O birthday.

After wowing Red Devils fans across the globe with his sensational 60-yard half-volleyed pass on to the boot of Robin van Persie in the FA Cup against West Ham last week, there’s every sign that Giggs will join former United stars like Teddy Sheringham and Edwin van der Sar, who played into a fourth decade in the top flight.

The Welsh wizard is set to play his part against Liverpool at Old Trafford today on a key weekend for the Premier League leaders. And Giggs ­revealed how ­hardline boss Ferguson has given him the green light to manage his own day-to-day schedule to turn his dream of playing at 40 into a reality.

He said: “The manager is brilliant with me and at this stage of my career he really allows me to manage myself in terms of my fitness and training.

“In a way I suppose I get an easier ride than some of the younger lads and that’s because the manager recognises I have different needs at this point.

“But don’t get me wrong, my fitness has to be spot on otherwise I just couldn’t compete with the rest of the guys either in training or during matches.”

Giggs, winner of 12 Premier League titles with United, went on: “The main thing now is the recovery after games which can be hard sometimes. While the other lads may be straight back to an intense session I probably have a little longer to rest.

“But as for normal training, I do what the other lads do. The only difference is my recovery process is slightly longer at my age and the manager appreciates that.

“The rest of it is just like it’s always been in that you have got to take care of yourself at this club – work hard and look after yourself.”

The evergreen midfielder isn’t about to kid anyone that it’s getting easier to perform at the top level.

But when he comes to ­deciding whether or not to hang up his boots, he’ll ­apply the same ­criteria he has done for the last few seasons.

Giggs said: “I will see how I feel and see how I am contributing, and then I will sit down to talk with the manager.

“I am cool with that. I am ­enjoying my football at the ­moment, but the end of the season is a few months away and you never know what might happen.

“I have to contribute as well as enjoying both ­training and playing.”

He may get some ­concessions in training, but there’s one thing age and experience doesn’t shield Giggs from – ­Ferguson’s infamous ­­hairdryer!

Giggs said: “I don’t think anyone is ever spared the ­hairdryer from the manager. ­

“No-one is ever ­allowed to rest on their laurels and I’m no different.”

He said: “I sense it’s ­going to be an exciting second half to the season. If we keep our focus and carry this form on then I think we will be OK.

“The hunger and desire the lads have been ­showing in ­recent weeks is there for everyone to see.”