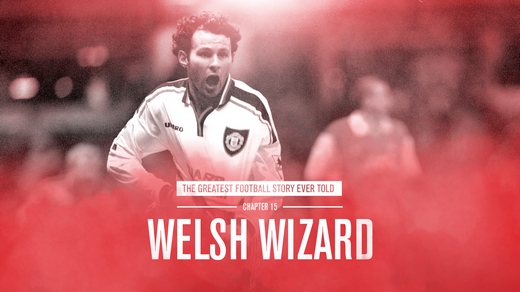 As part of the build-up to Tour 2015, presented by Aon, we’ll be reflecting on some of the most important and unforgettable times in the Reds’ history - something we believe to be the greatest football story ever told. We'll also be hearing from some of the key personalities who have helped create that story. In chapter fifteen of our series we celebrate the career of United's record appearance-maker and most decorated star, Ryan Giggs...

Player, coach, manager, most successful ever servant, legend – only Ryan Giggs can lay claim to having held all those titles at Manchester United.

Player, coach, manager, most successful ever servant, legend – only Ryan Giggs can lay claim to having held all those titles at Manchester United.

When a spindly 17-year-old trotted on to the pitch to replace Denis Irwin in United’s home clash with Everton in March 1991, few could have predicted what an impact Cardiff-born, Salford-raised Giggs would have on the club across a 23-year playing career, and still to this day as a vital cog in the United coaching machine.

Giggs began his Reds career with a reputation as one of the most exciting young prospects in the English game. A United fan as a boy, he was poached from neighbours Manchester City after Sir Alex Ferguson personally turned up on his doorstep to ensure one of the country’s hottest prospects was not allowed to slip through the net and sign professional forms with our local rivals; it would prove to be one of the manager's greatest ever masterstrokes.

Pace, skill and balance formed the basis of Giggs’ game and they were traits which terrified defenders and thrilled United fans in equal measure as he scampered down the left wing week after week, creating and scoring goals. Comparisons with the great George Best were not surprising, but the Welsh winger would go on to eclipse the greatest of them all.

Giggs himself admits: “I was lucky to come into a team with such good players during such a successful era for the club,” but while talent and timing were paramount to helping him carve out the incredible career that he did, it would not have been possible without the dedication, hard work and passion for the game and the club which was there for all to see throughout his playing days.

Such qualities helped United's record appearance-maker claim almost every available honour in club football – two Champions Leagues, 13 Premier League titles, four FA Cups, three League Cups, one Club World Cup, one Intercontinental Cup, one Super Cup and nine Charity/Community Shields. In the process he helped create some of the greatest moments in the club’s history, most notably with his unforgettable solo goal against Arsenal in the 1999 FA Cup semi-final replay – a moment that encapsulates his undoubted genius and propelled United towards an unprecedented Treble.

Nowadays, the 41-year-old appears in a different guise, as assistant manager to Louis van Gaal. Having taken temporary charge of the team for the final four games of the 2013/14 campaign following David Moyes’ departure, he is determined to be just as successful on the other side of the touchline he trod with such distinction in a United shirt.

“I’m giving it my all, just like I did as a player,” he declared. “It’s completely different, you have to think like a coach rather than a player, but all I can do is do what I did as a player - I wanted to be the best player on a Saturday and each day now I want to put the best session on I can for the lads. I want them to enjoy it but I want them to get something out of it as well. It’s been the perfect transition for me – where that takes me, who knows? But whatever I do, whether it be coach, assistant manager or manager, I want to be the best, just like I was as a player.”

Whatever role he occupies, few would bet against Ryan Giggs achieving his aim.