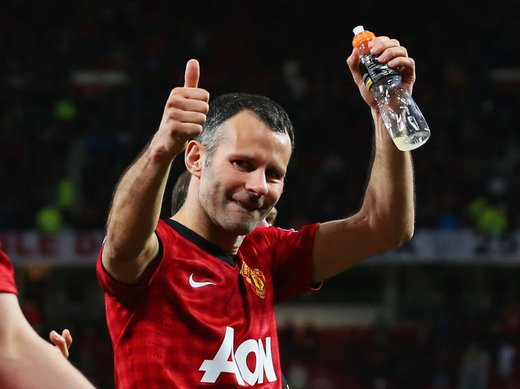 Ryan Giggs believes Manchester United manager Sir Alex Ferguson is on his way to building yet another team of serial winners after the iconic Old Trafford boss snared his 13th Premier League title on Monday night.

Giggs claimed his 25th major medal of a remarkable career as United beat Aston Villa to reclaim the Premier League crown, but with seven of his team-mates winning their first championship this season, the legendary Welshman believes this could be the start of yet another era of United dominance.

In hailing the manager he has worked with so successfully throughout his career, Giggs believes United's desire to wrestle the title back from local rivals Manchester City was the key to their triumph this season.

"There are a lot of young players who have learnt from last season and have gone on to play really well this season," Giggs told Sky Sports. "They have shown consistency, which is hard for a young player.

"That is the key to the manager's success. The way he evolves, the way he never stands still, he always looks forward and that shows with the amount of exciting young players we have in the team. We have players who can be here for a long time and carry on that tradition of competing for trophies.

"The manager's appetite is second to none. He is first at the training ground every day and that enthusiasm feeds through the club. He is the club. Everything comes from the manager, getting players in, getting the right staff in.

"He is just an unbelievable person and he deserves all the success he gets because he works very hard. I have been very lucky to play under him for so long."

The evergreen Giggs will be aiming to claim his 14th Premier League title medal when United start the defence of their title next season and he admitted this latest triumph is just as enjoyable as those that have gone before.

"This is obviously special," he added. "When you lose it in the manner we did last year, to win it back is something special. We have done it in style so it's really pleasing.

"We had a lot of injuries early on this season, the centre half position especially. Once we got that sorted, so have looked really solid and when you have got that platform of a defence with the flair payers we have got, you are always in with a chance."