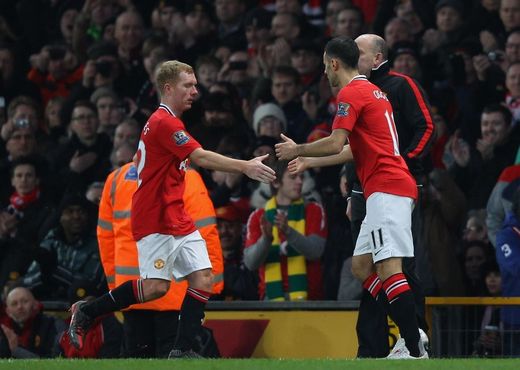 United boss Sir Alex feels Ryan Giggs and Paul Scholes are great examples to the younger players at the club.

Giggs has been rewarded with another contract extension while Scholes has shown no signs of rustiness after coming out of retirement to control the midfield again in his inimitable style.

The pair are still in tip-top condition and continue to excel this term, with Giggs crossing for Javier Hernandez's equaliser at Chelsea on Sunday. Indeed, the Welshman has the best minutes-to-assist ratio in the Barclays Premier League this season.

"The youngsters couldn't have a better mentor," stressed Sir Alex. "That's for sure. Him and Scholes are different types of midfielders but they've proved by their dedication in looking after themselves that they can play to that age. No question.

"I think Scholesy says: 'If he can do it, I can do it!' Paul came on the other night and changed the game a little bit. It was amazing as the focus went on to Scholes. The ball was like a magnet to him. Ryan was on the left-hand side doing what he was doing all game."

After 898 appearances for the Reds, there is no doubt that Giggs is fully deserving of a new deal at Old Trafford as he closes in on another remarkable landmark.

"I think it's a miracle," enthused the boss in an exclusive interview with MUTV. "His form this season has been the same as the last five or six years, to be honest with you. His fitness is incredible.