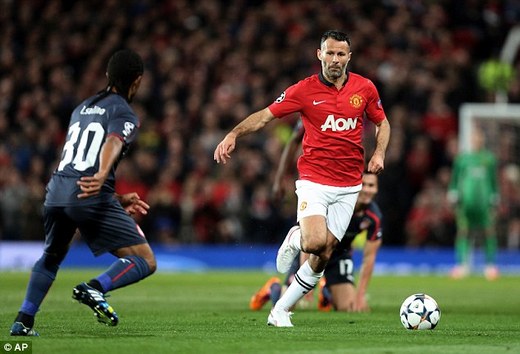 Ryan Giggs gave the game away about the current internal divisions at Manchester United when he spoke moments after his triumphant first-team return against Olympiacos.

‘When you have pace and power around, it is a joy to play in that midfield,’ said the 40-year-old, now player-coach under David Moyes.

To underline the point, Giggs then namechecked three Ferguson players for praise. ‘Welbeck, Antonio [Valencia]. Obviously me and Carra [Michael Carrick] have played together quite a bit.’

The pressure for Moyes to revert back to ‘Fergie’s formula’ — two quick, direct wide men — has intensified in the past week.

Gary Neville was critical of Moyes’s team selection last weekend when his big signings Juan Mata and Marouane Fellaini played at the expense of Welbeck in the 3-0 defeat to Liverpool. As a brother of United coach Phil, Neville’s words about a lack of pace in the team carried bite.

Welbeck and Valencia returned for the Champions League and now the big question for Moyes is what he does for Tuesday night’s big showdown with Manchester City.

Having spent £64million on Mata and Fellaini, you would presume he would want to play them in the biggest games. Robin van Persie’s knee injury frees up one extra space, but regardless of that, the influential Class of 92 are adamant every United line-up must have ‘legs’.

This season’s team under Moyes have been too slow and predictable. However, there is no guaranteed start for Giggs against City.

‘We’ll pick and choose and try to use Ryan at the right times,’ said Moyes. ‘His performance the other night showed what a great player he is so we’ll continue to try to use him and try to get him prepared for the games we think he is ready for.’

Prior to Olympiacos, Giggs had not started a game since the win against Cardiff on January 28. He hinted at his recent disappointment in being left  out: ‘This is probably longer  [being out of the team] than I would like but that’s the way it goes,’ he said.

‘If selected [to face City] I know I can do 90 minutes, no problem. I think in midfield, especially, the team we’ve got, you can pick and choose your runs.’

Despite the club’s poor form this season, the United board insist they are not thinking about a change of manager.

Chief executive Ed Woodward is holding a three-hour meeting with Moyes this week about possible transfer targets. At least three new defenders are needed, a world-class holding midfield player and winger, and possibly a striker.