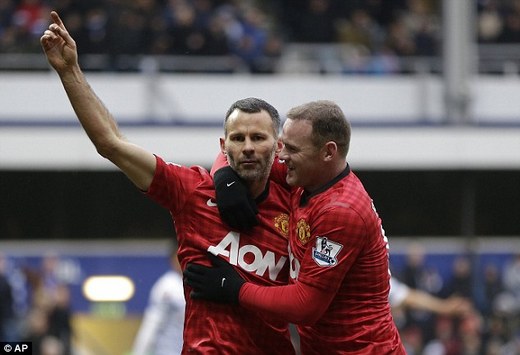 Ryan Giggs made the 999th appearance of his career at QPR on Saturday and marked the occasion with his second Premier League goal of the campaign.

It sealed  a win that cemented the Red Devils' 12-point lead at the Premier League summit with just 11 games remaining.

After struggling during the early weeks of the campaign, it confirmed Giggs has returned to top form, just as the prizes are starting to be dished out.

And, with Ferguson now formulating his strategy for next Tuesday's Champions League duel with Real Madrid, Giggs has put himself in contention.

'It is a headache for the manager but a good one,' said Giggs. 'We are not looking too far ahead and we are not getting too excited.

'But we are in good form and the manager has a big squad to choose from, which allows him to chop and change and that is all you can ask for at this stage.'

There has been no official word on the fitness of Robin van Persie, although as the Dutchman did continue for a little while after colliding with a TV camera at Loftus Road before eventually being replaced, it would be a major surprise if he failed to make the Real game given its importance.

Van Persie's contribution for United so far this season doesn't immediately make it obvious why Sir Alex Ferguson would be interested in Borussia Dortmund forward Robert Lewandowski, whose advisor has cryptically suggested he will be leaving in the summer.

United are not in the habit of spending big money on experienced back-up players, so unless Ferguson has a radical plan up his sleeve it is difficult to imagine the Pole ending up at Old Trafford.

The Red Devils are cruising along quite nicely at the minute, with Michael Carrick earning praise from his club's supporters, when they hailed Carrick's passing style as being almost a replica of Paul Scholes' at the weekend.

An unassuming character by nature, Carrick's response is to claim the song 'hard to believe it's not Scholes' is delivered tongue-in-cheek, which is certainly not the case.

Of more significant to the 31-year-old anyway, is the help Scholes has given him during his near seven-year stint with the Red Devils.

'Scholesy is a legend, so I don't know whether it is tongue-in-cheek but it is a nice song and I will take that,' said Carrick.

'It is always good to be compared to players like that.

'Paul is as good as it gets and has been throughout his career.

'To train alongside him and have the chance to learn every day has been something I have tried to make the most of.

'It has helped me bring my own game on whether he knows it or not and that has been a big help.'

Scholes is even less likely to get lured into a media frenzy than Carrick.

So the former England man's depiction of his team-mate as a 'Rolls Royce' of a player has to be worth something.

Yet again though, Carrick prefers to side-step the compliment, underlining instead a belief that Scholes' comments show just how united Ferguson's squad is in their Treble quest.

'It shows the respect there is within the squad for each other's game,' said Carrick.

'We all have different qualities and we all want to help each other to be successful.'