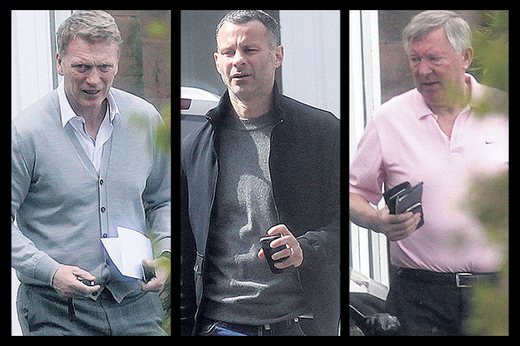 New Manchester United manager David Moyes met with his predecessor Sir Alex Ferguson and Old Trafford stalwart Ryan Giggs yesterday amid speculation that the Welshman could be offered a role on the Scotsman's coaching staff.

Moyes was named as Ferguson's replacement last week after the 71-year-old announced his retirement from the Old Trafford hot seat.

The trio are also reported to have discussed Wayne Rooney's future after the striker asked to leave the Premier League champions.

Moyes met with Ferguson and Giggs at a Cheshire hotel on Monday before the Everton boss addressed the Cambridge University Union later in the evening.

Appointing Giggs would represent a masterstoke, given his wealth of experience and his standing in the United dressing room.

The 39-year-old has admitted to being open to management and was tipped to replace Gary Speed as Wales manager.

'Everyone who has played and managed would say that playing is much, much easier. Players come in to train at nine o’clock and they are at home by at half twelve,' he said earlier this year.

'Managers spend their time worrying about the team, so it is a completely different job and situation.

'Succeeding Gary [Speed] was never really an option for me though. I spoke to the gaffer and United were ready to offer me a new deal. I wanted to play on.'

Giggs has already earned his coaching badges and became the first to complete them while still playing.

One of Moyes' first tasks will be to convince Rooney to stay after the striker demanded a transfer for the second time in his United career.

Chelsea have been linked with a move for the England international with Paris Saint Germain also an option.

He said: ‘It is a fitting tribute to the manager after so long and so much success. As much as it is for the team, its for the manager, for himself, what he has achieved and what he has done to this football club. He deserves everything he has got.

‘He has been brilliant for us all. He is a great manager he is successful and he is a winner. To do it for so long is incredible, he is a fantastic manager.’

Rooney, though, was not even on the bench on Sunday for Manchester United's last home game of the season.

Instead, he watched from an executive box and joined team-mates to celebrate United’s 13th Premier League title at the final whistle.

The striker and Ferguson barely acknowledged each other when Rooney — jeered by some United fans when he got on to the field — walked up to receive his medal.

‘I don’t think Wayne was keen to play simply because he’s asked for a transfer,’ Ferguson said.