Giggs: A day for celebration 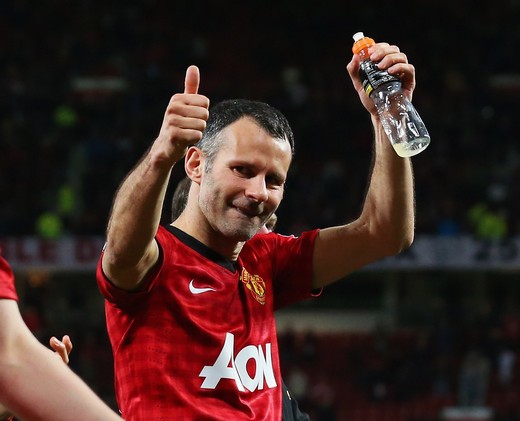 Before this week’s momentous news, Ryan Giggs spoke to United Review about the prospect of finally lifting the Barclays Premier League trophy after the game against Swansea on Sunday afternoon.

This is a 13th title for the Welshman but he says receiving the silverware once more in front of a full house at Old Trafford will be as satisfying as ever.

Of course, the day takes on greater significance as it's a 723rd and final home game for Sir Alex Ferguson, whose farewell address to the fans is sure to be poignant.

But it will also be an occasion to celebrate – both the team’s 20th league championship success and the manager’s glorious 26-year reign.

"To reach 20 is a brilliant achievement," Giggs told the Reds’ matchday programme. "Obviously we won it a couple of weeks ago and that was great to have won it early.

"It’s not often that you have to wait this long to actually get your hands on the trophy, so we’re all really looking orward to it. It’s going to be a great occasion.

"Overall the day is great for the fans, for the staff and for the players and their families – you’ll see all the lads’ kids on the pitch celebrating.

"Sunday is about everyone who has shared in the journey – it should be a celebratory occasion."

Giggs knows the challenge now is for United to retain the title next term under new manager David Moyes.

"This summer we’ll go on holiday knowing we’re successful and all the hard work was worth it," he added.

"But we’ll come back fighting next season to try to win it again."