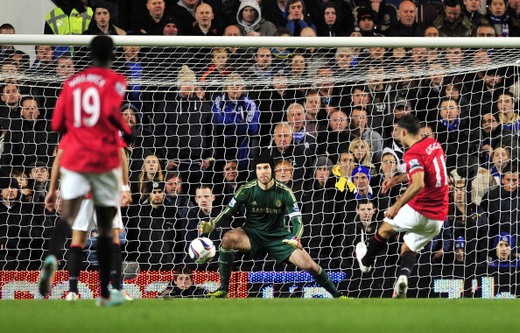 The Welshman may have had a spot-kick saved by Southampton's Tim Flowers in the Reds' first-ever FA Cup shoot-out when a teenager but has shown great reliability since and converted in the recent Capital One Cup exit at Chelsea.

Wayne Rooney is still first-choice, as Giggs is not a regular starter, and made it 17 out of 25 penalties for United with his effort in Braga on Wednesday, while Nani and Robin van Persie have also taken responsibility from 12 yards this term.

"I think Wayne has to accept he must have a better strike-rate at penalties," stated Sir Alex. "He took one the other night and, even though he has slipped, it still went in and he's hit the target. That's important - to hit the target - if you hit it well and the keeper saves it, full marks to him, but you have to make him make a great save.

"The one thing about Rooney is it won't matter if it's the World Cup final or the first round of the cup against an amateur team, he will want to score and his temperament, if he misses it, doesn't affect him.

"That's important as that's an issue with a lot of players taking penalty kicks. In the case of Rooney, his temperament is good that way.

"I think Giggs is probably the best penalty-taker. I can't ever remember him missing since he had one saved against Southampton in the FA Cup in 1992. But he doesn't play every week. Maybe I'll bring him on like in American Football games!"