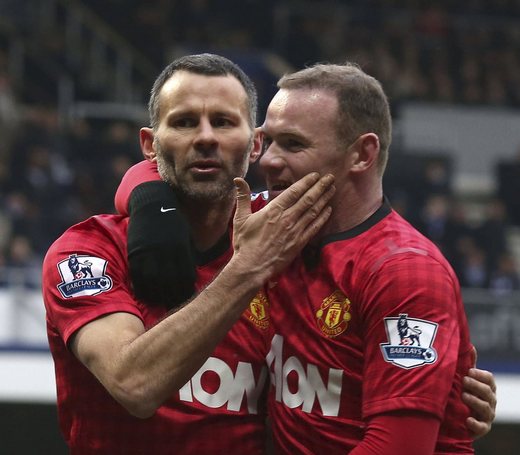 ALEX FERGUSON reckons he is losing track of time after Ryan Giggs turned back the clock to leave Manchester United eyeing another Premier League title.

The midfielder, 39, scored his team’s crucial second goal in his 999th competitive appearance almost 20 years after first making his mark at QPR’s home.

And United boss Fergie has still not forgotten another Giggs wonder goal in a 3-2 win at Loftus Road way back in February 1994.

Ferguson, whose side opened up a 15-point lead over Manchester City at the top, laughed: “He scored a great goal at that same end and I think it was about 30 years ago!

“He’s got a good record here and it came at a crucial time for us because anything can happen when you’re only 1-0 up with 10 minutes to go.

“David De Gea had just made a fantastic save from Loic Remy so Ryan’s goal put it to bed and it leaves us in a tremendous position.

“But Rafael’s opening goal was one of the best you are ever going to see and it set us up to make sure we were going to be very hard to beat. It tops off a good season for him.

“I said to him that he must have closed his eyes before he hit it but the lad has been magnificent for us again and is maturing all the time.

“He’s scored one, cleared one off the line and had a fantastic performance today.

“The win today was more about determination and concentration, particularly at the back. It was a scrappy game at times and the pitch was lively.

“It’s a tight ground and it was the ideal situation for a shock.

Fortunately we didn’t get that because we defended against it very well.
“I knew this was a day to play all my experienced players.

“Ferdinand, Vidic, Carrick, Giggs, Van Persie, Evra — plenty of experience. And it stood us in good stead. We’re in a better position than we were yesterday. We’ve got one game less and the only way we can approach it is by trying to win our next game and see where it takes us.”

He said: “We are in a tremendous position and we really had to dig in to get that important 15- point lead, so we are pleased about that.

“We knew it was going to be difficult because QPR are fighting for their lives.
“At 1-0 you never know how it’s going to go but at 2-0 we kept the ball better and in the end it was quite comfortable.
“It leaves us in a good position but we can’t get too excited. The main thing is that we’re in good form and we have nearly everyone fit so the manager can chop and change to keep everyone fresh.”

The result leaves QPR rock-bottom of the Premier League and seven points adrift of safety. But manager Harry Redknapp is refusing to chuck in the towel, insisting: “I’m still optimistic we will stay up. People might think I’m mad but I don’t.

“I hope the players share my optimism. If they don’t, what can I do? Everyone else has written us off already but it’s still all to play for.

“We’ve got 11 games left and every one of them is going to be important. This result leaves us bottom of the league but we won’t be there at the end of the season.

“The problem for us is that we don’t score enough goals and we’ve not had any forwards in recent games.

“But now we’ve got Bobby Zamora and Loic Remy back and if we can keep them fit for the rest of the season I can see them doing a lot of damage to opposing defences. I’m banking on those two to get enough goals to get us out of it.

“There really wasn’t a lot in it today. I didn’t think United were flowing today but this is a difficult pitch to play on and we have to play to our strengths.

“We started OK but then right out of the blue the lad Rafael has hit one out of the clouds into the top corner.

“He’ll never score another goal like that as long as he lives.

“Of course United will win the league now. They are certainties.

“Ryan Giggs is a fantastic player. It just shows what you can do when you look after yourself.”

Redknapp also revealed that he is giving another chance to full-back Jose Bosingwa, who played his first game since being fined two weeks’ wages for refusing to sit on the bench against Fulham in December.

Redknapp said: “He has over two years left on his contract and we can’t keep paying him without letting him play. He made a mistake but we can’t go on punishing him for ever.

“I took him to Swansea the other week and didn’t put him in the squad to test his attitude. And he was fine.”