David Beckham will fly in for Gary Nevilles testimonial 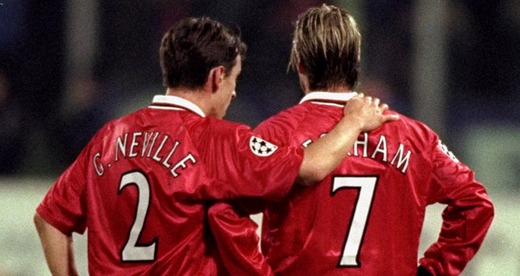 DAVID BECKHAM handed long-time pal Gary Neville a major boost last night by revealing he will fly back from Los Angeles for the full-back's Old Trafford testimonial on Tuesday.

Neville had sent out an invitation to Becks last week, hoping he would face Juventus and ensure a bumper crowd by appearing in a Manchester United shirt for the first time since 2003.

It will mark the reunion of United's famous 'Class of 1992' which included Becks, Ryan Giggs and Paul Scholes.

But it also signals a major climbdown from the LA Galaxy, who did not want their 36-year-old midfield star to travel.

Becks' LA Galaxy boss Bruce Arena said: "We'd be resting David in one of the games next week anyway."

And Becks added: "I think Bruce knows how important it is for Gary. It's more important than anything for me to be there for Gary."