David Beckham, Paul Scholes, Nicky Butt and the Neville brothers... now only Ryan Giggs remains from the Class of '92 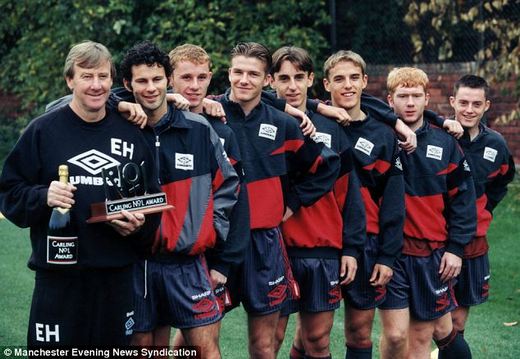 Paul Scholes led the tributes to David Beckham last night after his former Manchester United and England team-mate announced that he is calling time on a glittering 20-year playing career.

Beckham, Scholes, Nicky Butt and the Neville brothers were members of the Class of '92 who helped Sir Alex Ferguson deliver unprecedented success to United.

Scholes, who is also retiring at the end of this season, said: 'It's a sad day but hopefully David is happy with what he's done.

'From the start you knew the quality he had, and the professionalism. His range of passing and his free-kicks were brilliant and that was no accident - he was out there practising all day long. He was a top, top player and it has been great to play with him.

'That's all our year finished now. I think there's only Ryan Giggs, who was a year older than us, left still going as strong as ever.'

Eric Harrison was the youth-team coach at United who oversaw Beckham's development after first seeing him at the age of 12.

'There's nobody in the world, when they see a boy at 12, who can say he's going to go to such great heights as David,' said Harrison.

'But I saw a very talented player - one absolutely in love with football. His control, his passing, his awareness, his shooting, free-kick taking, were just extraordinary for a boy so young.

'The hard work was the catalyst. He never had a lot of pace but in terms of stamina, running and work-rate, he was probably one of the best I've worked with. It was a bit of a shock when he left because his father was a long-standing Manchester United supporter and David was in love with the club.'

Ian Bryson was playing for  Preston North End when Beckham had a five-game loan spell at  Deepdale during the 1994-95  season before his rise to stardom.

'His first training session on the astroturf at Preston College wasn't great and we wondered what United had sent us,' said Bryson yesterday. 'But he proved us all wrong very quickly. He came down to Leyton Orient when we won promotion the following season and joined in the celebrations. He was an established player at United by then but he came into the dressing room and shook everybody's hand. He never forgot Preston and we never forgot him.'

Steve McClaren was Ferguson's assistant when Beckham won the Treble with United in 1999, and worked with the midfielder when manager of England.
He said: 'My lasting memory is of David Beckham being the last off after training, and practising those free-kicks that won England,  Manchester United, Real Madrid, wherever he's been, many games.

'He was a winner and that was infectious. He developed and matured and adapted his game, as you have to do playing 20 years at the top level.'
Beckham's coach at LA Galaxy, Bruce Arena, admitted Beckham had to be talked out of turning his back on the American dream.

'David was frustrated because the LA Galaxy experienced very little success,' admitted Arena. 'He is such a great competitor and was questioning his move. We were able to get it turned around, largely attributed to David's presence. He did wonderful things for our club, and he's a person we can't replace on the field or off it.'

British Olympic Association chair Lord Coe also had praise for a man with whom he worked before last summer's Games.

'It is impossible to think about the success of London 2012 and not reflect upon the extraordinary commitment made by David Beckham,' said Coe. 'At every stage of the journey David was a constant source of support and inspiration.

'He is proud of his north-east London roots and understood the role the Games could play in transforming the lives of young people. His impact across football - and all of sport - will be felt for generations to come.'