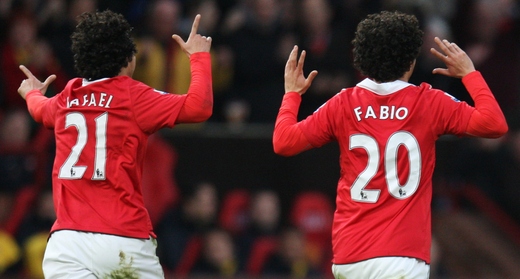 The sight of the teamsheet made the new banner hanging in the Stretford End read like an ironic subtitle to what we thought might unfold. "Giggs, tearing you apart since 1999," the new legend reads, though the only thing that Sir Alex Ferguson's side looked capable of ripping was the footballing convention that says you pick a row of defenders and midfielders and place a striker or two in front of them.

No one could recall Ferguson picking seven defenders in the same side. It was on this day in 2005 that Roy Keane scored his 51st and final goal for Manchester United in a 4-0 win over Southampton in the days when Cristiano Ronaldo graced the right flank and scored. Distant days. Now, the wide flanks of turf trodden so memorably for so long by Giggs and Ronaldo were occupied by Rafael and Fabio da Silva, the young Brazilians who have not yet established themselves as the full-backs that they were signed to be.

Ferguson's hand was forced, with Michael Carrick and Darren Fletcher indisposed until next weekend at the earliest. With Giggs and Paul Scholes required to face Marseille on Tuesday, a team full of stoppers was about the best he could do. Never did Javier Hernandez's prayer of supplication appear more appropriate.

The debate about United's lack of personnel does not dissolve just because the club are in an FA Cup semi-final. This is the season in which Arsène Wenger has justifiably suggested United lack an offensive dimension to go with defence.

Yet, that Wenger should have played the strongest side available to him and still seen three hopes of trophies vanish in the space of 13 days is a stunning reinforcement of the fact that all the golden skills in the world cannot deliver silver.

The players whose talents were most befitting this great stadium last night wore yellow shirts. Samir Nasri , who has joined Wenger's faintly pejorative talk United, glided through midfield; Jack Wilshere was undaunted as Arsenal's climb grew steeper and steeper. But neither could fashion what was delivered up by those twins from whom Ferguson could no more expect results than he could tell them apart.

Neither of the brothers has looked entirely at home on the big stage. Rafael, the elder, should not even have been on the field given that his unfortunate propensity for rash challenges should have seen him dismissed for a double-footed challenge on Liverpool's Lucas Leiva last weekend.

But we certainly know a bit more today about the telepathy shared by the boys from Fluminese. When 15 minutes had gone, Fabio (he's themarried one; the wedding ring is the way Ferguson tells them apart) had twice been stopped in his tracks by Denilson.

But you imagine that the cross he then popped over for his brother is the kind that has found his head a thousand times from beach to training ground over their years. Inconceivably, Rafael placed it over the bar, but that's not how it was 12 minutes later when Fabio's fine crossfield pass – brother to brother, again – began the move which eventually saw Fabio put United ahead.

No matter where Ferguson placed either brother, they seemed curiously effective. Rafael shuffled into central midfield when Fabio made way for the returning Antonio Valencia at half-time and still it worked. His run into the Arsenal box marked the beginning of the second goal and the beginning of the end for Wenger.

As the second half wore on, there were ample demonstrations of the gold at Wenger's disposal. Marouane Chamakh, Aaron Ramsey and Tomas Rosicky all arrived and all to no avail.

Theirs was not a wretched display, even though their manager could only stare at his feet as the visiting contingent of fans cried his name. Three times, Edwin van der Sar was called upon to save his side and he was Ferguson's man of the match once again.

But though time and luck might run out on Ferguson, for now he can reflect on the most supreme irony of this night. That the Da Silva twins would be the property of the Emirates, had Wenger not lost out to Ferguson in the chase to buy them.