Class of '92 re-United: David Beckham enjoys a day in Manchester with former teammates Giggs, Butt, Scholes and the Neville brothers

He's gone on to become an international superstar and arguably the most famous footballer of all time.

But David Beckham went back to his roots on Monday night as he headed out in his old haunt of Manchester with his former Manchester United team mates Ryan Giggs, Gary Neville, Phil Neville, Nicky Butt and Paul Scholes.
The footballers headed out en masse to catch up and unwind for the evening as they reminisced about the last 22 years. 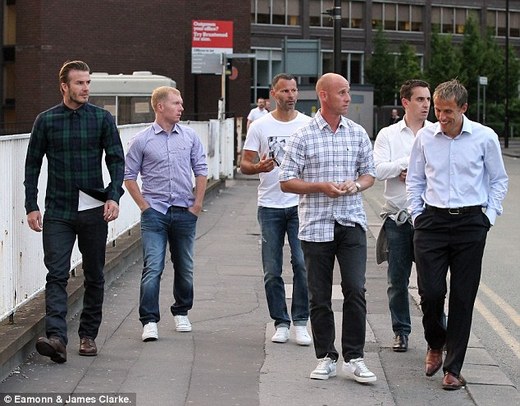 Don't tell Fergie: Beckham, Scholes, Butt, Giggs, Gary Neville and Phil Neville paint the town red
The six Reds legends had a lot to catch up when they met up at the Artisan Bar & Restaurant on Monday, 22 years to the day since they signed their first professional contracts at Old Trafford.
The six, branded Fergie's fledglings, helped transform Manchester United and set the club on their way to two decades of dominance of English football.
Beckham has since gone on to marry a Spice Girls star, move to Los Angeles and become an international superstar known the world over.
But he looked more than happy to be catching up with his long time pals, showing his down to earth side as he walked along in a checked shirt, dark jeans and smart shoes. 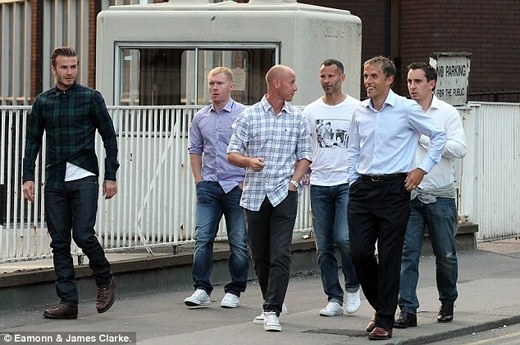 Catch up: David looked dapper in his smart casual ensemble as he stepped out in a checked shirt, dark jeans and smart shoes 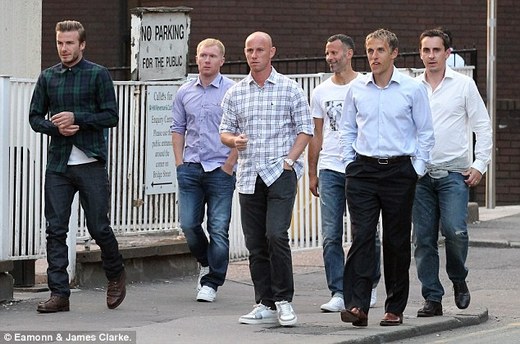 En masse: The footballers looked in high spirits as they grinned and giggled as they caught up in their old stomping ground of Manchester 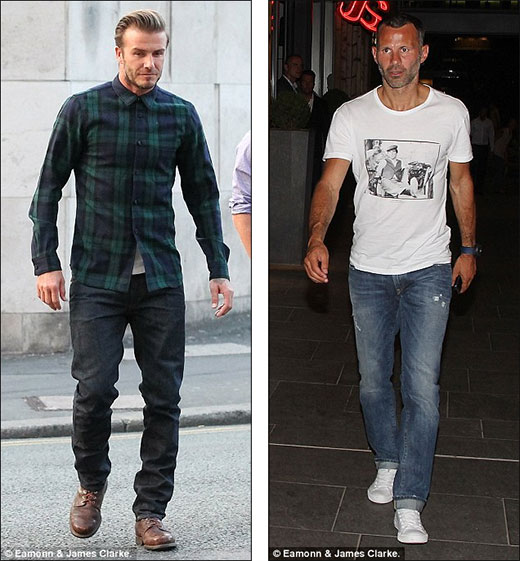 Still friends: He's gone on to huge things and become an international superstar but on Monday night Beckham went back to his roots
The rest of the men opted for a variety of shirts or T-shirts and jean combos, either with trainers or brown leather shoes.
They grinned and giggled as they were spotted walking along to the bar to mark the occasion.
Even before United won the FA Youth Cup in 1992 there had been talk of a crop of youngsters to compare with the Busby Babes, who won the first competition in 1953.
Each one was developed by United from a very early age, some signing schoolboy forms with the club at the age of just 14. 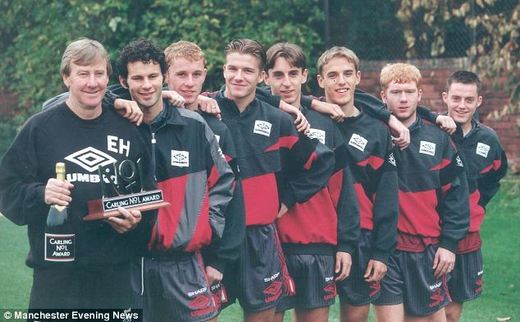 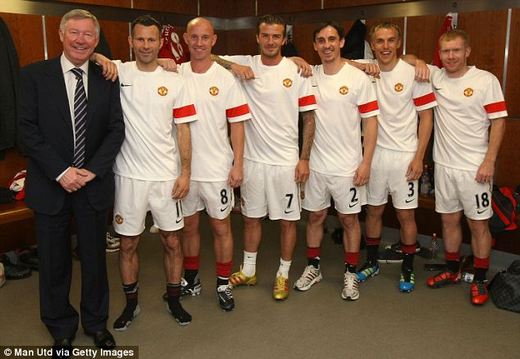 Looking a bit different: Giggs, Butt, Beckham, Gary Neville, Phil Neville and Scholes recreate the above photo with Ferguson ahead of Gary Neville's testimonial match in 2011
The term 'Fergie's Fledglings' came back into common usage during the 1995–96 season, after Ferguson largely used this second group of youngsters coming through to replace a number of distinguished older players who had left the club.
Following a 3–1 opening day away defeat to Aston Villa, pundit Alan Hansen commented on Match of the Day 'You'll never win anything with kids.' 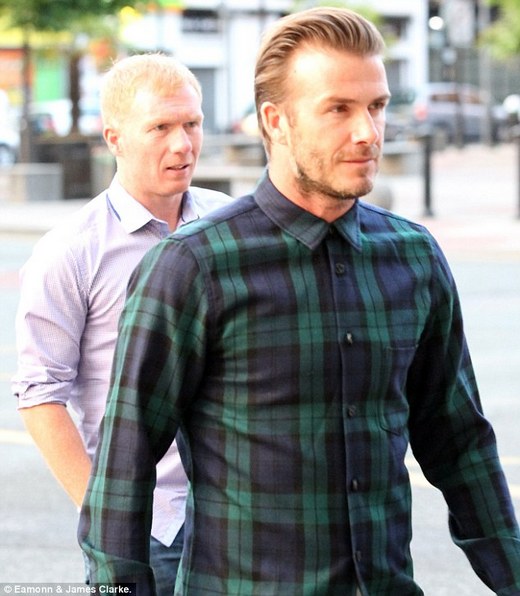 Dapper: The boys headed to the Artisan Bar & Restaurant to enjoy some food and drinks together
The young side, with an average age of just 24, then went on to overturn Newcastle United's 10-point Christmas lead to win the club's third league title in four years. This was followed up by a 1–0 win over Liverpool in the 1996 FA Cup Final to secure the Double. A period of great success followed, the most outstanding triumph being The Treble in 1999.
Many of the so-called 'Class of '92' became regulars for both club and country during this time. 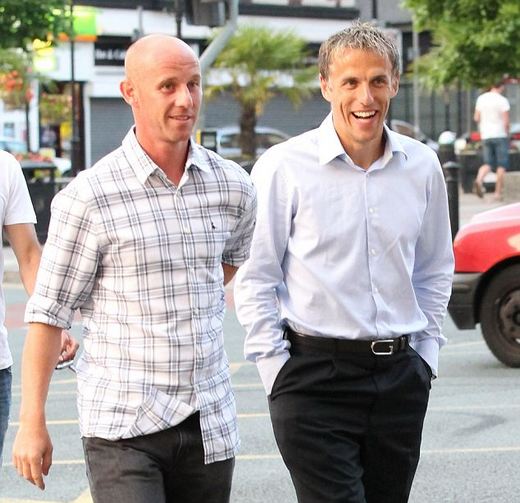 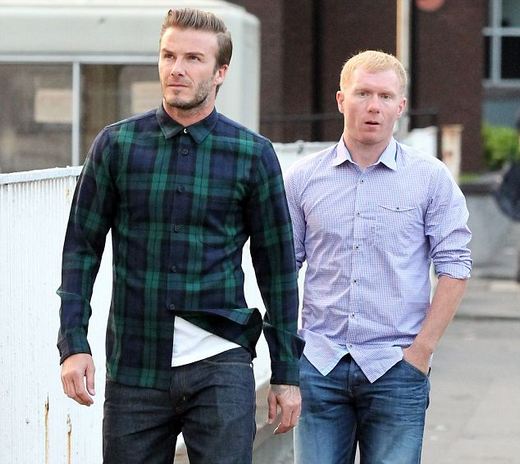 Dashing: Beckham leads from the front 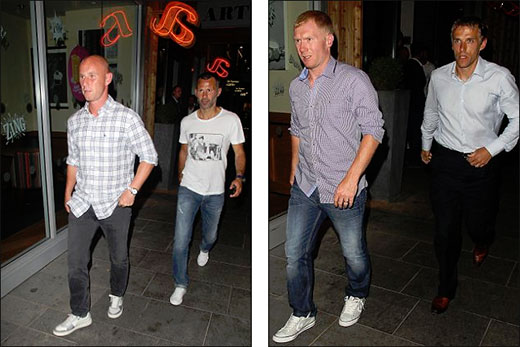 Had enough lads? Butt, Giggs, Scholes and Phil Neville head home
And it seems they're having a big reunion this week as the following day on Tuesday the crew also all turned up to Old Trafford together.
Beckham arrived with Gary Neville and Paul Scholes looking remarkably fresh faced after their night out together on Monday.
And while David was in the area he made sure he took time to visit the special Manchester United merchandise shop.
Inside he was seen perusing the aisles while he was photographed by fans and stopped to sign autographs for them.