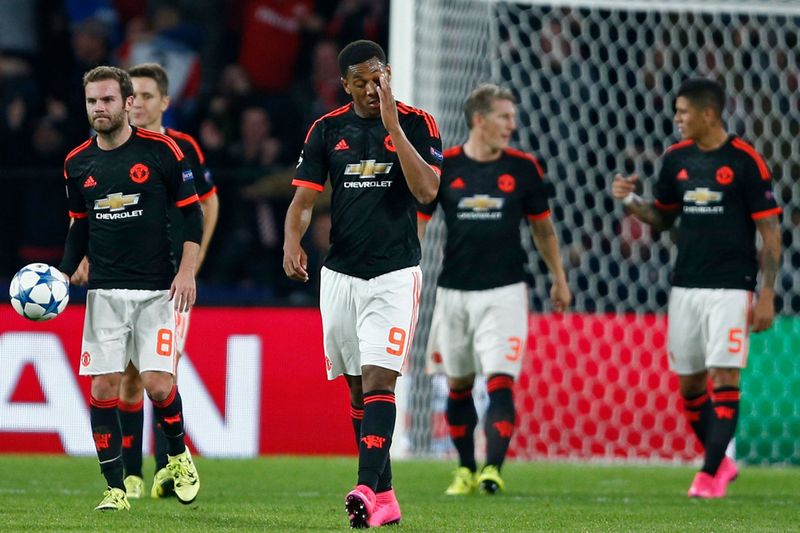 Manchester United’s return to the Champions League group stage ended in disappointment as hosts PSV Eindhoven came back from conceding a goal by their former player Memphis Depay to seize a hard-fought victory with headers from Hector Moreno and Luciano Narsingh.
To make matters worse for Louis van Gaal’s side, left-back Luke Shaw was stretchered off with a serious injury midway through the first half after being challenged strongly by Hector Moreno when making a trademark surge into the area.
With Marouane Fellaini feeling unwell in the build-up to the game, Anthony Martial was presented with his first United start, three days after scoring as a substitute on his debut against Liverpool. An attacking front four also featured Juan Mata in the no.10 role with Ashley Young and Memphis – on his return to PSV – operating on the flanks. 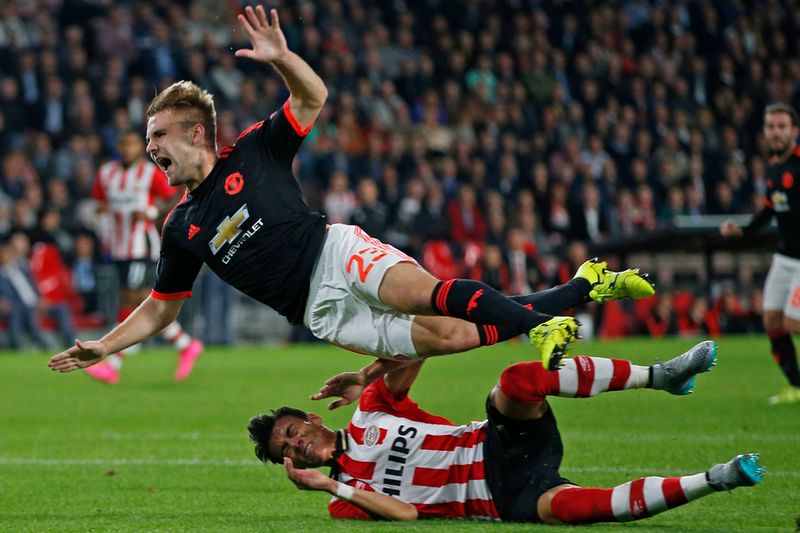 Memphis’s name was greeted with a huge roar from the home fans when it was announced over the PA system, and he also stirred a reaction from the 1,600 travelling fans by fizzing in the first menacing cross of the match. PSV goalkeeper Jeroen Zoet snapped up that low ball with Ander Herrera closing in but he had little else to do before the first half had a lengthy pause of almost 10 minutes due to Shaw’s awful injury and the need to prepare him carefully for a stretcher journey from the pitch. When the stricken left-back was eventually carried off, it was to warm applause from all sections of the crowd.
The first real incident when play resumed was a relatively routine save for David De Gea, although the shot from PSV left winger Maxime Lestienne was certainly well struck. Martial headed narrowly wide when given a half-chance to open the scoring but the deadlock would soon be broken by that man Memphis. 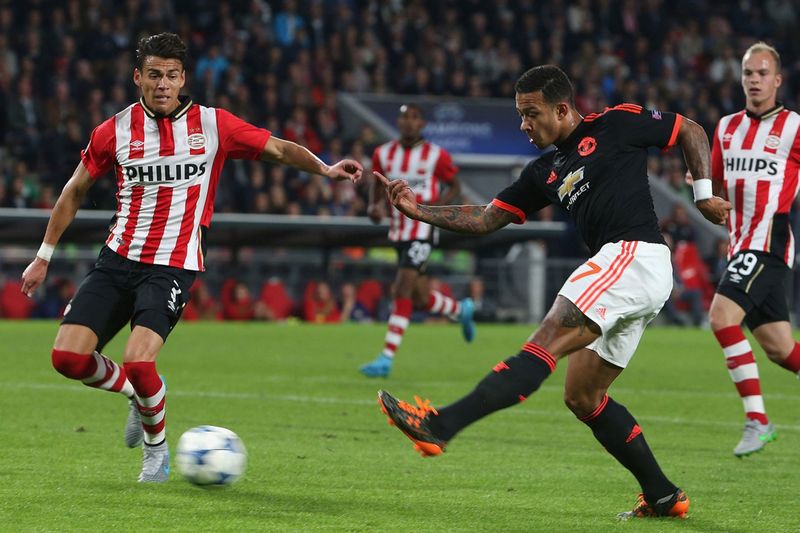 Fed by Daley Blind, United’s no.7 shrugged off Arias and skipped past a second defender before beating Zoet with an emphatic finish. It was a tremendous goal by the 21-year-old and he almost scored a second from a similar angle in the very next attack, a three-on-three break led by Juan Mata and comprising Martial too, but this time his shot whistled the wrong side of the far post.
At that stage it seemed like the floodgates might open for van Gaal’s men, especially when centre-back Chris Smalling fleetingly became a centre-forward and had a fierce strike pushed brilliantly aside by Zoet. But after twice threatening to double the advantage, the Reds surrendered it just before the interval when Lestienne’s corner was met with conviction by Moreno and his downward header was inadvertently diverted beyond De Gea by Blind to make the half-time score 1-1. 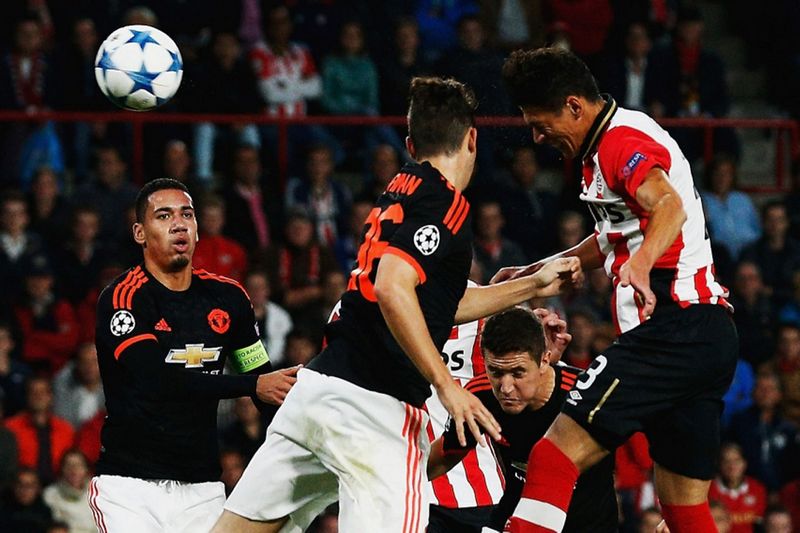 With Martial leading the line confidently and holding the ball up well with his back to goal, United fashioned the first notable shot after the break when the Frenchman teed up Memphis and the Dutchman drilled one into the keeper’s clutches.
The quick tempo continued to the visitors’ cost in the 57th minute, however, when Lestienne broke free down the left. His first-time cross just eluded Rojo and was buried at the far post by Narsingh’s diving header to put PSV in front. The Reds spurned a great opportunity to get quickly back on level terms, with Mata’s control uncharacteristically letting him down when Bastian Schweinsteiger picked him out with a sublime ball into the six-yard box. 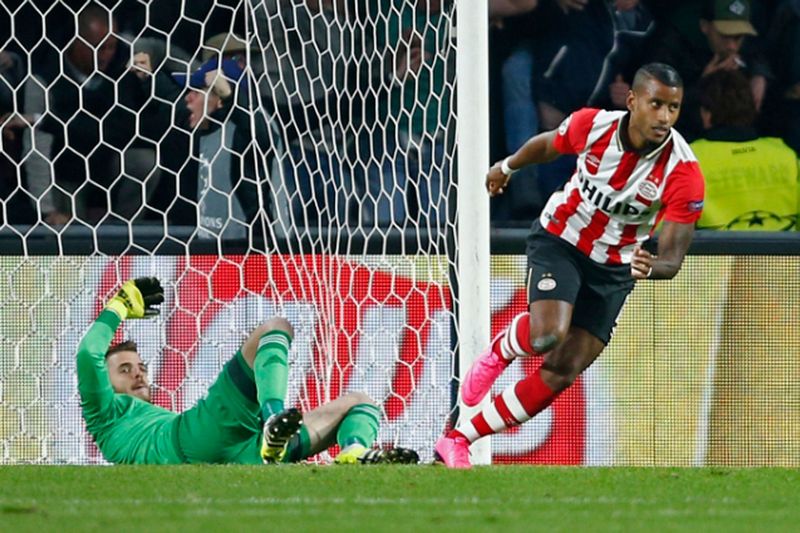 Martial was another player who felt he should have done better, when he planted a shot across the face of goal after being played in by Memphis. His frustrated reaction reflected the growing sense that this wasn’t to be United’s night and so it proved with PSV defending stoutly to protect their three points, and occasionally counter-attacking with Luuk de Jong firing high and wide.
The home fans and players lapped up the taste of victory while the United squad were left to lick their wounds, with one of those wounds - to Shaw - being particularly painful and serious.

#MUFC’s return to the Champions League group stage ended in disappointment as hosts PSV Eindhoven came back from...