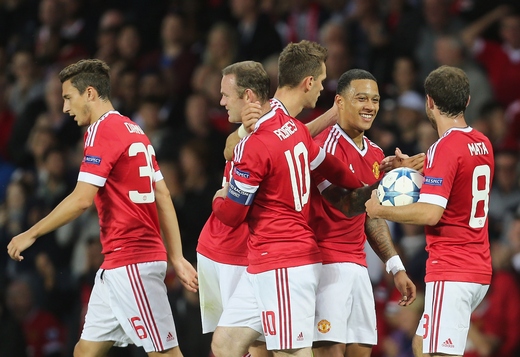 Memphis Depay scored twice and notched an assist for Marouane Fellaini during a magnificent performance to help Manchester United secure an important 3-1 first-leg victory over Club Brugge in the UEFA Champions League play-off.
Although Louis van Gaal will be disappointed to have conceded a potentially disruptive away goal, via an unfortunate deflection off Michael Carrick, this night belonged to Memphis and a summer signing who looks set to enjoy the adulation of Reds supporters following a mesmeric display.
United could have taken a lead in the very first minute after Juan Mata released Adnan Januzaj on the right with a carefully lofted pass, which allowed the Belgian to run at his marker before hitting a cross that almost found the lurking Wayne Rooney inside the Brugge penalty area. Memphis then hit a deflected shot at goal to round off a slightly frantic opening five minutes at Old Trafford. 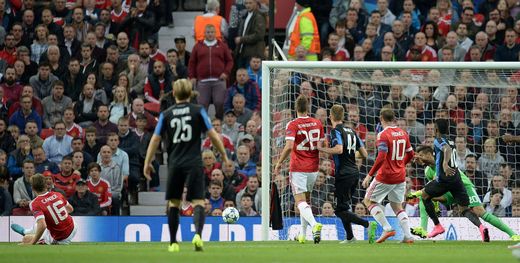 Despite the Reds’ energetic start, the visitors took a shock lead in the 8th minute and in the cruellest of circumstances. Victor Vasquez, who was praised by van Gaal before kick-off, hit a 25-yard free-kick that cannoned off Januzaj in the wall before Carrick diverted the ball past a helpless Sergio Romero. Crucially, it gives Brugge an important away goal to take home to Belgium. 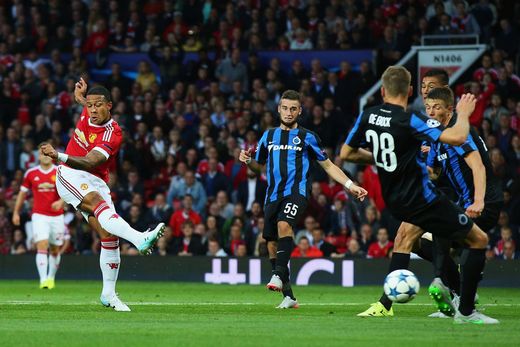 United responded brilliantly and almost instantly restored parity with a moment of individual brilliance from Memphis, who expertly controlled Carrick’s powerful pass, knocked the ball over his marker, dribbled at the defence and smashed home a low finish in front of a jubilant home crowd. It was the Dutchman’s first competitive goal for the club, and it could yet be of great significance.
The former PSV Eindhoven forward saw another deflected effort bounce wide on 25 minutes and, fresh from receiving a round of applause from the fans, his resulting corner led to Rooney hitting an acrobatic volley just off target. Januzaj was then played through on goal via a sumptuous pass from Mata, though the no.11 was shepherded away from a scoring opportunity by a Brugge defender. 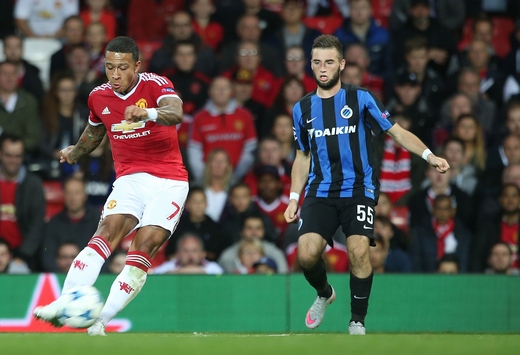 The travelling fans in the away end were unrelenting but they were temporarily silenced on 42 minutes after Memphis cut inside from his position on the left wing to curl a sensational effort into the far corner, before celebrating in front of the United fans who undoubtedly have a new no.7 to worship.
HALF-TIME STATISTICS
Possession: United 66% Club Brugge 34%
Shots: United 7 Club Brugge 1
Shots on target: United 4 Club Brugge
Corners: United 3 Club Brugge 1
The second half began with Bastian Schweinsteiger replacing Carrick in midfield, but United were not affected by the change as Mata almost instantly stung the palms of the goalkeeper with a low shot from the edge of the penalty area. Star man Memphis shot wide moments later, before unleashing yet another long-range effort as he continued to torment Brugge.
There was a moment of slight controversy on the hour mark, at least from a Belgian point of view, when substitute Obbi Oulare latched onto a weak back-pass from Matteo Darmian to force Romero into a poor clearance, which was then knocked into United’s goal by Brugge. However, German referee Deniz Aytekin had pulled play back for an apparent foul on United’s Argentinian goalkeeper.
Memphis could, and perhaps, should have sealed his hat-trick soon afterwards when he blazed over the bar from close range. Javier Hernandez later replaced Januzaj on 71 minutes to make his first appearance of the season and the Mexican’s arrival was greeted by an ovation from the fans. 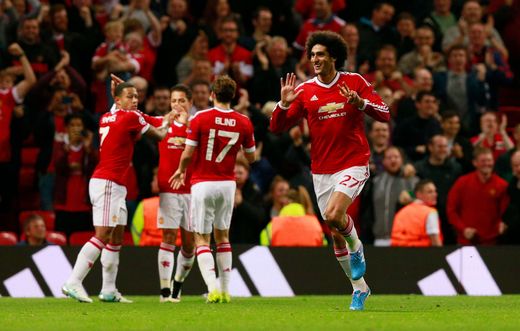 Brugge were reduced to 10 men after Mechele received two yellow cards in quick succession, with the second coming after a badly-timed challenge on Chicharito, and the Belgians subsequently dropped deeper into their own half as United chased a third goal. After applying pressure, the Reds eventually found a breakthrough as substitute Marouane Fellaini rose to head Memphis' cross home in added time, wrapping up an important 3-1 victory ahead of next Wednesday's second leg.
FULL-TIME STATISTICS
Possession: United 69% Club Brugge 31%
Shots: United 19 Club Brugge 1
Shots on target: United 8 Club Brugge 1
Corners: United 10 Club Brugge 1

Memphis Depay scored twice and notched an assist for Marouane Fellaini during a magnificent performance to help #MUFC...