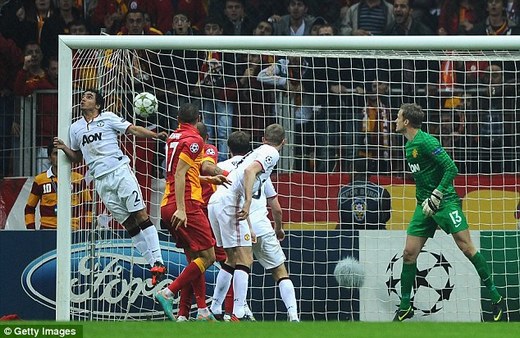 Manchester United and Galatasaray served up a breathless and bruising encounter on Tuesday night in front of a ferociously partisan crowd at the Turk Telekom Arena.

The home side, thanks to Burak Yilmaz's 52rd-minute header, may have claimed the spoils – and, with them, kept alive their hopes of reaching the Champions League knockout phase – but Sir Alex will have been pleased by the footballing education his young squad received.

Indeed, in many respects, the result in Istanbul was always going to be an afterthought for a United side that arrived in Turkey already through to the Last 16 as Group H winners.

This trip was about blooding the club’s youth – eight of the 21 players who travelled to Turkey arrived without a previous European appearance to their name – and opening their eyes to one of the most hostile atmospheres in European football.

And although Sir Alex’s future stars dodged the fiery welcome at Ataturk Airport on Monday night (police advice prompted a last-minute change of terminal after hundreds of Galatasaray fans descended on the building), there was no sidestepping what lay in store at the 55,000-capacity Turk Telekom Arena.

Even the noise generated in the warm-up made the loudest of English atmospheres seem tame. Galatasaray fans – drums beating, bodies bouncing – whistled, sung and chanted their way towards kick-off. When it came, they just kept going. With added flares, streamers and a giant 3D lion, of course.

The opening exchanges proved almost as lively. Tom Cleverley and Yilmaz both stung palms with efforts from outside the area before Danny Welbeck’s cross almost caused Felipe Melo embarrassment. Semih Kaya was booked for a two-footed lunge on Alexander Büttner and Hamit Altintop took a blow to the ribs to round off an action-packed first 10 minutes.

Yilmaz was then guilty of spurning two headed opportunities as Galatasarary began to stamp their authority on the match. The first he miscued, the second he headed over; both attempts were made under little or no defensive pressure.

Still, in the powder-keg atmosphere, Sir Alex’s side just about held their own, played neat passing triangles when in possession and did well to keep cool under an ever-growing list of robust challenges.

A spell of frantic defending ensued when Lindegaard spilled Altintop’s drive. In the next phase of play Galatasaray were convinced they should have had a penalty when the ball struck Büttner’s arm. Welbeck then raced down the other end and won a corner, from which  Phil Jones was inches away from nodding in at the far post.

Nick Powell, in his first Champions League fixture, went even closer when he thundered a header off the crossbar on 43 minutes. And there was still time for the home side to threaten before referee Carlos Velasco Carballo brought a brilliant half to a close.

Lindegaard was twice called into action early in the second period. He held well from former Liverpool and Manchester City left-back Albert Riera’s volley and then spectacularly turned over Felipe Melo’s bullet header from 10 yards.

Melo urged the crowd to give more, to sing louder, and they responded immediately. It did the trick, as Galatasaray took the lead from the resulting corner, Burak succeeding where he had previously twice failed.

Minutes later, United looked certain to equalise as the Reds broke at speed and in numbers. But when Welbeck laid the ball across the box to Javier Hernandez and the Mexican checked back inside and pulled the trigger, Melo was there to bravely block.

He celebrated as if he’d scored and it was then you realised just how much the home side craved a famous scalp.

Galatasaray, sensing this was their night, moved in for the kill. Eboue forced Lindegaard into an athletic stop and Altintop, who toiled  tirelessly all evening alongside Melo, crashed a shot against the bar with 12 minutes remaining.

Nevertheless, the Reds could leave the pitch with heads held high – older, wiser and having played their part in a thrilling contest. Sometimes, winning isn’t everything.