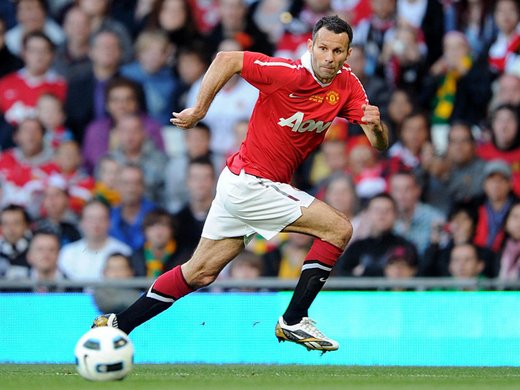 Manchester United arrived in town last week for a 7 p.m. friendly Wednesday against Sounders FC at CenturyLink Field. In anticipation of the game, The Seattle Times had an exclusive interview Friday with club legend Ryan Giggs, a 37-year-old midfielder for the reigning EPL champion, to discuss the game and his celebrated career.

Q: United has grown into a huge mega-club, but what did you know about the team as a kid growing up in Wales?

Giggs: "Well I was a United fan, so I've followed the club all my life really. At that stage Manchester United was a huge club but probably underachieving, whereas Liverpool was probably not as big a club fanwise but was a lot more successful. They were the benchmark really that we needed to get to."

Q: You signed with the first team in 1990. How special is it to have been with one team for so long and seen it grow as it has?

Giggs: "To win that first league title (to end a 26-year drought) was special, especially growing up as a Manchester United fan. I'm fortunate to have played in the most successful era of the club. It's been a huge honor for me to be around and to see it go from not winning trophies to winning trophies consistently."

Q: Sir Alex Ferguson said one of the appeals to United is that its teams have always played the right way. How much do the players carry that as a responsibility?

Giggs: "I think the manager's right. I think first of all you want to win things, but you also want to do it in style. You want to please the fans, because Manchester United fans have grown up with that history of attacking players, flair players, and I think if we were winning things and not playing attractively, the fans wouldn't stand for it. They want to win things but they also want to do it in the right way."

Q: Do you think it adds an appeal when players like yourself, David Beckham, Paul Scholes, etc., have come up through the youth ranks instead and the team hasn't had to rely on big-money signings from other teams?

Giggs: "Again, I think it's part of Manchester United's history. They've always brought players through, even from the '50s where the Busby Babes were so successful. Right from that stage really, and even before, it's something the fans can relate to: seeing a player grow up through the youth team, seeing them develop from 13 or 14 to the first team and playing for the national team, as well. It's something that the manager's very proud of. He wants to see it. But you also have to bring in the quality from around the world that brings the different personalities and different cultures to the club that we've seen over the last five years. Also you need that new face, a nucleus of young players that know the history and know the traditions of Manchester United."

Q: To be with one team your whole career is rare. It might be rarer to spend it all with one manager. What has that been like?

Giggs: "It's something that I'm proud of. He's probably the greatest manager that's ever lived. I learned so much from him at such an early age and I carry on learning."

Q: Are there certain accomplishments that you're also particularly proud of? Most games played (876) for United? Being the only player to score in each EPL season?

Giggs: "When it comes to winning things and the records that you break, those are things you don't really think about while you're still playing. ... The things that stick out are the trophies that you've missed out on or the games that you've lost. Defeat lasts a lot longer with you."

Q: What is it like having such a loyal following wherever you go in the world?

Giggs: "It's great when we come to America and see the fans that we have here — it's just developing all the time from when I was here nearly 8-9 years ago. We've been to Australia on tours and seen the fans there. I remember my first preseason tour we went to South Africa and I just had no idea the amount of fans that Manchester United had. It never ceases to surprise you the amount of fans that we do have. It's great all around the world."

Q: Do you remember much from your last trip to Seattle in 2003?

Giggs: "I remember we played in the same stadium (against Celtic) and it's a beautiful stadium. I just remember that really. It's great to be back and play in the stadium against a Seattle team who are doing well at the moment. It should be good fun."