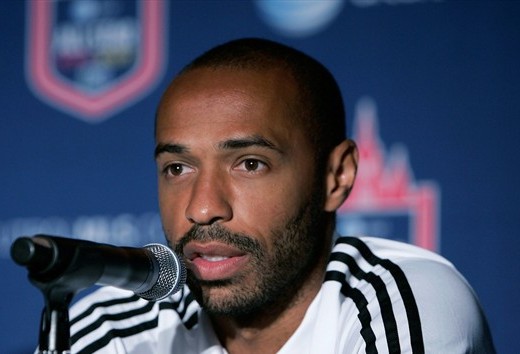 Thierry Henry has vowed to emulate Ryan Giggs as he prepares to make his Arsenal comeback.

Henry, 34, completed a two-month loan deal on Friday and warned Arsenal supporters not to expect the same player that left the Gunners for Barcelona in 2007.

Arsenal's record goalscorer was famed for his pace and power but he believes that, while he may have lost some of those traits, other areas of his game have improved. He has pointed to the likes of Giggs and former Arsenal team-mate Dennis Bergkamp as examples of players who adapted their game to extend their careers.

While Giggs no longer commands a place in the Manchester United team every week, at 38 he remains a key member of Sir Alex Ferguson's squad and Henry believes he can play a similar role at Arsenal.

"I am not 25 anymore. I am not going to take the ball from the middle of the park and dribble past five or six players. Don't expect that," Henry said. "I remember Dennis [Bergkamp] and he used to be the main front guy. Suddenly he was playing behind the striker and if you have the awareness to see things before players, you can get away with not having your legs.

"If you look at Ryan Giggs, it's not the same Ryan Giggs who used to take the ball from the wing or from Denis Irwin and dribble past everyone and deliver a great cross, but what Ryan Giggs has is he can see the game, he is always available, he puts himself in a position where he can receive the ball alone and then you will never lose your touch. That's what I am going to try to bring to this team if I have to play."

Henry could make his first Arsenal appearance in front of the ESPN cameras on Monday, when the Gunners welcome Leeds to Emirates Stadium in the FA Cup, but he knows he is unlikely to play 90 minutes every week. "Well, right from the start, as I said, it looks more like I'm going to be a bench player. Or maybe not on the bench but more of an out of the side type of player," he said.

"I can definitely have some input out there, to talk to the guys and let them know what it means to win. I am a competitor and that will never leave my body. I never had any expectations, even when I first came to Arsenal, and will try to play 100% whenever I get the chance to. I'm just going to help those guys get through some difficult moments."

Arsene Wenger has confirmed Henry is set to make an appearance on Monday.

"Thierry will be involved against Leeds, but at the moment 90 minutes is a bit long for him because he has not played for a long time," Wenger said. "He works hard, but he is a bit behind physically. In one or two weeks Thierry will be fine."

He added: "Thierry is a world-class player and even at this club a player of that dimension is always very difficult to find, especially at this period of the season. He can just add something more to the team."

Wenger also said he has no intention of selling Theo Walcott, despite reports of interest from Juventus.

Wenger said: "We want to keep Theo and he knows that. Of course [he earns his money] - he works every day and works very hard. His attitude is great. I have no problems with that at all."