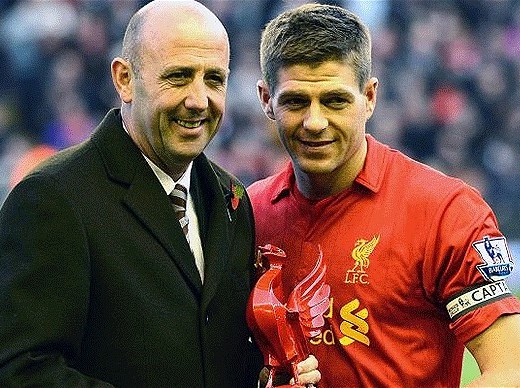 The Liverpool captain, now 32, says he disagrees with the view – prevalent at his own club – that youngsters offer more value for money. He argues there has to be more understanding of what players in their thirties and late twenties offer.

He says Sunday’s opponents, Manchester United, typify how a mixture of youth and experience is a winning formula.

Liverpool’s own policy is focused on signing players in their early twenties. Deals for those nearing their thirties, such as the aborted pursuit of Clint Dempsey last August, have been blocked by owners Fenway Sports Group.

But the trend is not limited to Anfield. England captain Gerrard is amazed Chelsea will allow Frank Lampard, 34, to leave on a free transfer this summer.

The contrast with United is stark. Gerrard is still a pup compared to Ryan Giggs, 39, and Paul Scholes, 38, who have remained pivotal to Sir Alex Ferguson’s side. United’s £24 million purchase of Robin van Persie, now 29, may prove the critical point of the title race before a ball was even kicked.

“I disagree with it,” said Gerrard, when asked about the focus shifting entirely towards younger players. “I’ve seen many signings throughout the world who have gone to clubs at the age of 28, 29 or even older and done fantastic jobs. Gary McAllister for one when he came here.

“The main example at the moment is if Chelsea don’t keep Frank Lampard and another big club comes and gets him and he produces top attacking midfield performances for the next two years.

“Once your Terrys and your Lampards are long gone I think they’ll be appreciated even more. That’s the way football is. It’s a bit similar at United when Scholes and Giggs eventually move on. That’s the reason why Alex Ferguson is holding on to them. If someone of his calibre – someone who’s done what he’s done in the game and with his knowledge – knows how important it is to keep hold of those players it tells you how important experience and top pros are.

“I can understand the policy that everyone wants young, bright, British players, but I don’t agree that it should 100 per cent be the only way. I think you’ve got to add experience to young gifted players as well in this league and at this level.

“I learnt bucket loads from Gary McAllister. I look at Aston Villa now and the majority of them are going to be fantastic players in time but in my opinion that team at the moment needs two or three old heads in to guide them. Stiliyan Petrov is going to be a big miss for them. To be successful at this level you need to get the mix right.”

Gerrard will soon be in a similar predicament to Lampard. Brendan Rodgers wants his captain to have his contract extended. It has 18 months left, but no approach has yet been made to renew it.

Gerrard said: “I think I can play another three or four years. I’m not saying I want a contract for that length, nothing of the sort, but nothing has been spoken of with my representatives yet. The injuries I’ve had have done my head in throughout the years but the desire and the hunger are still there. As soon as that goes I’ll stop playing. If you haven’t got that I don’t see the point.

“Physically, from day one of the season I’ve felt great. My form hasn’t always been great but physically I’ve felt the best I’ve felt. It’s all down to sports science and that side of it. Getting two days recovery and not leaving my legs on the training ground and getting pushed too hard for training, saving it for games.

“Around this manager the sports science team is brilliant. They’ve looked at all my figures from all the managers I’ve worked with before they have come in and my training programme is adapted around that. The day before a game I don’t do any high intensity work that could make me tired going into the game.”

Liverpool head to Old Trafford 21 points behind United – a sobering reminder of the gulf between the clubs still considered the most intense rivals in English football.

“It is still the biggest game for both clubs,” said Gerrard. “They are obviously above us with league titles but we’ve still got the European Cups on them so the rivalry is not going anywhere for a long time. Alex Ferguson was quoted last year saying Liverpool is still their biggest game and that’s not changed this side either.

“I can’t sit here and say we’re on their level because we’re not but don’t think we’re a million miles away. To be eighth and see United flying high again, of course it hurts. But you have to carry on, keep fighting and try and catch them.

“We’re eighth in the league and it’s not good enough. We’ve played really well in the majority of games. I can name the ones when we’ve not turned up – Arsenal at home, and West Brom and Stoke away. Those three aside, we should be in a better position because of the football we’ve played, but the league doesn’t lie.”

Gerrard has shown signs of returning to his best form in recent weeks, although he understands he is judged to a higher standard than others.

“When you’ve been around for a long time and you’re not scoring goals or setting them up, maybe you don’t get judged the same,” he said. “In some of the games earlier on I played well but didn’t score or set a goal up and it didn’t get mentioned. I’ve played the same recently but I’ve scored one or set one up and everyone is raving about your performance, even though there’s not really that much difference, which is fine. But you get judged as a player sometimes based on what you do in and around the box rather than the game as a whole.”