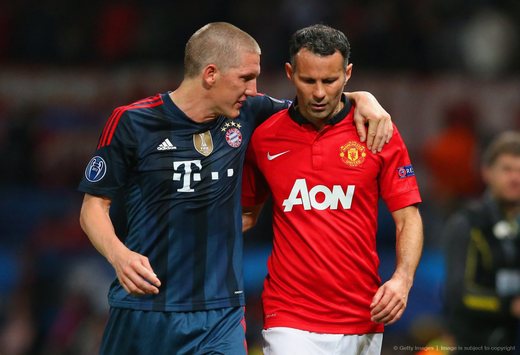 Bayern Munich midfielder Bastian Schweinsteiger hopes to follow in the footsteps of Ryan Giggs and play on until his 40th birthday.

Schweinsteiger, who made his debut in 2002, has enjoyed a highly successful career at Bayern, winning the Bundesliga seven times and the DFB-Pokal on six occasions, as well as the Champions League, the European Super Cup and the FIFA Club World Cup.

The Germany international, who played a key role in last season’s Treble, told kicker magazine: “I am 29 now and having the best time of my career.”

He added that, having played against Giggs in the 1-1 draw at Manchester United in the Champions League quarterfinal first leg earlier this month, he hopes to enjoy many more years of success.

“Looking at Ryan Giggs, and what he has done against us at the age of 40, then it seems I have only just reached the halfway line,” he said.

Despite his many trophies with Bayern, Schweinsteiger has yet to win a major trophy with Germany after 101 international appearances. The midfielder, who played in the 1-0 defeat to Spain in the Euro 2008 final, is determined to make amends at the World Cup in Brazil this summer.

“The Champions League trophy and the World Cup are the two biggest titles in the world,” Schweinsteiger said. “I’ve got one. Of course, I would love to have the second one as well.”