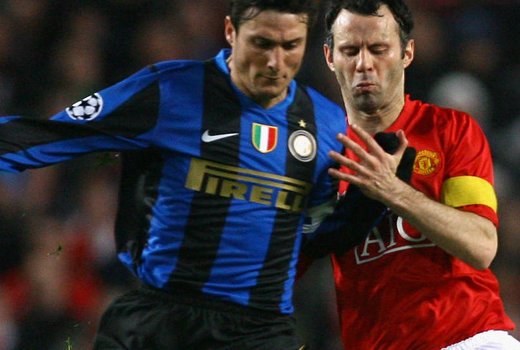 Ryan Giggs has described Javier Zanetti as his 'most difficult opponent', but says he was never tempted to join the Inter Milan captain in Serie A.

He has spent over 20 years in the Red Devils' first team and has come up against numerous high-class full-backs at domestic, European and international level.

Giggs has pinpointed his fellow 38-year-old Zanetti as his toughest test in a career that has seen the Welshman move into a central midfield role following years on the left wing.

"The most difficult opponent to play against was Javier Zanetti," Giggs told Gazzetta dello Sport.

"I faced Zanetti for the first time in the Champions League quarter-finals in 1999, he was the right-back and I was on the left.

"He impressed with his qualities, his speed, power, intelligence and expertise.

"I played against him twice more and he was my most difficult opponent, a complete player."

Giggs was linked with a move to Inter in 2003 as part of a swap deal involving Brazilian striker Adriano, but he insists he did not consider quitting Old Trafford to move to the Giuseppe Meazza.

"I don't know if (president Massimo) Moratti wanted me at Inter," he added. "The newspapers spoke about it but I have never had any contact.

"However, it would have been useless. I never wanted to leave United."

The United stalwart also praised the career of Alessandro Del Piero and revealed Juventus were among the strongest teams he has played against.

He continued: "In my career, it has always been difficult to play against Italian teams. Before we won the Champions League in 1999, Juventus were the strongest team, but we also dealt with two very good teams like AC Milan and Inter Milan.