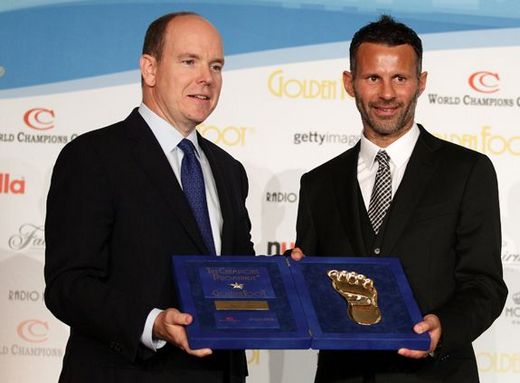 Ryan Giggs paid tribute to the man who's mentored his 20 years at the top with Manchester United after scooping the Golden Foot award for 2011.

After receiving his trophy from Prince Albert II of Monaco, the Reds legend said he had been "fortunate to play for the greatest manager" in Sir Alex Ferguson.

"He's hard but fair. He demands a lot from his players as he does from himself," remarked Ryan, at Monday night's glittering Golden Foot ceremony.

"He is the best manager and it's great to have had him there throughout my career."

Giggs was named Golden Foot winner after a record number of votes were cast on the competition's website. As part of his prize, the Welshman will have a permanent mould of his footprints on Monte Carlo's 'Champions Promenade'. This Hollywood-style celebration features some of the biggest names in the history of the game.

Ryan said, "It's a great honour to win such an award and to have my footprints alongside some of the greatest football players is a real privilege.

"I have been fortunate to play alongside great players, play for the greatest manager and play for the best club in the world. At the moment I am still enjoying my football so I have not thought about what I will do when I finish, but if it all finished tomorrow I could say that I have had a fantastic career and wouldn't swap it with anybody."

The Golden Foot is an annual award honouring footballers aged 29 or over who "stand out for their sport results (both as single players and with their team), for their personality and for the esteem of the public and football experts."

Ryan had been nominated five times prior to winning it in 2011.