Ryan Giggs will still be flying for Manchester United at 40! 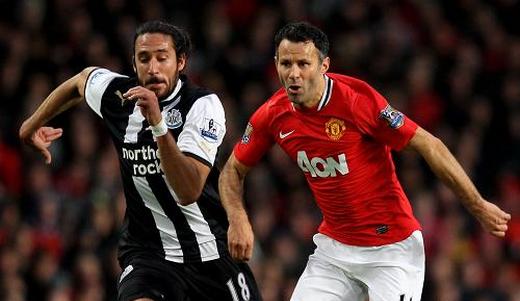 Ryan Giggs can further embellish his legendary Old Trafford status by becoming only the second United player to play for the club in his 40s.

Giggs celebrated his 38th birthday on Tuesday having added to his status as United’s number one all-time appearance maker against Newcastle last Saturday.

The winger-cum-midfielder is 13 matches away from an astonishing landmark of 900 appearances for the Reds.

If Sir Alex Ferguson offers him another 12-month contract for next season, which is on the cards, and he plays for the first team in the 2012-13 campaign, Giggs will become the second oldest United player in the history of the club.

He will leapfrog 1950s player and fellow Welshman Jack Warner as the oldest post-War Reds player and will then overhaul 1920s Red Frank Mann to move into second place.

Giggs is unlikely to catch up and topple 46-year-old Billy Meredith as the true daddy of them all.

However, in the modern-day game reaching the 40-year-old milestone would be another remarkable achievement for Giggs.

And Harrison has no doubts now that one of his star pupils can do it.

“Ryan has the dedication, the ability, the physique and mentality to go on,” Harrison told M.E.N. Sport.

“He is a remarkable man. His pace is still good, although obviously not as electric as it used to be and he is still so fit.

“As a coach I am always looking at players to judge their fitness and one of the ways I can monitor that is by looking at them when they have gone on a lung-bursting run and have to track back to their position. You see so many players get back into position and they are out of breath. When they do that the tell-tale sign is they put their hands on their knees and pause to get their breath back. You know they are not fit.

“I have never seen Ryan with his hands on his knees. He is never out of breath it is amazing.

“Physically he can play into his 40s and he has the football brain to do it as well. I can see Giggsy as a holding central midfield player getting the ball off defenders and started moves from deep.”

Giggs, who has used yoga exercises to aid his longevity, was the first of Harrison’s famous Class of ‘92 FA Youth Cup winners to break into Fergie’s senior squad.

In fact, he’d made his debut before helping the likes of David Beckham, Gary Neville, Paul Scholes and Nicky Butt to claim the coveted youth trophy. The latter trio have retired from the game, but Giggs carries on.

However, there is the possibility that United boss Fergie might tempt him to concentrate on a football job at Old Trafford next summer and finally make the decision to not have the choice of picking Ryan Giggs any more.

“I think it is 99.9 per cent certain that Ryan’s future is at United and he’ll be offered a role at the club,” Harrison added. “He is doing his coaching badges and I know, for instance, that the English FA say he is a good prospect. If the manager were to say to him you can manage the reserves, help coach the first team or whatever and retire as a player I think Giggsy would find that a very difficult decision to make. I think he wants to go on playing for as long as he can.”

As Harrison congratulates Giggs on his 38th birthday, he recalls the occasion when the young teenager almost drove him to drink!

“When I first saw Ryan play for Manchester Schoolboys at Old Trafford he took my breath away,” recalledHarrison.

“I went home and told my wife that I’d just seen a player who could play for Manchester United for years. He was outstanding. My wife is not a football fan but I remember her saying that I had never ever said that about a young player before.

“But I just knew he was destined for great things. The problem was he was at City at the time. But the manager and scouts worked on that and I think the day they told me he had signed for United I went out and got drunk!”