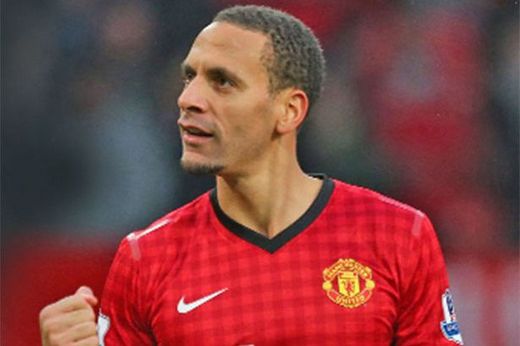 The latest twist in the saga that is Rio Ferdinand’s England career is yet another embarrassing episode for Roy Hodgson.

Be it those infamous ‘footballing reasons,’ loose lips on the London Underground or, now, the centre back’s ‘thanks, but no thanks’ after being recalled – Ferdinand is the gift that keeps on giving, as far as the England manager is concerned.

And not in a good way.

Perhaps Hodgson should be thankful for small mercies.

The pair met in London on Sunday night, which is when Ferdinand informed him of his decision to pull out of the squad for the World Cup qualifiers against San Marino and Montenegro.

Given the path their relationship has taken over the past 12 months, it is easy to imagine Hodgson, sat, lonely, in a crowded restaurant, nervously looking towards the door each time a customer walks in.

At least he wasn’t left nursing his tap water and breadsticks for an hour and a half before realising he’d been stood up.

Ferdinand and Hodgson did meet up – but England have been jilted nonetheless and once again it’s the manager left with egg on his face.

Nobody is questioning the validity of Ferdinand’s reasons for withdrawing from the squad in order to continue the meticulous training regime that has enabled him to manage his back condition with such success over the past year.

But it is still a slap in the face for Hodgson, who, having steadfastly omitted the 34-year-old from each of his squads before recalling him, has been so publically humiliated.

Remarkably, both player and manager were adamant that the events of the last 48 hours did not signal the end of Ferdinand’s England career.

But it is virtually impossible to imagine a way back for the United defender now.

Next year’s World Cup was always a long shot for a player with a history of back problems who hadn’t represented his country since June 2011. But if such personalised treatment can prevent him from playing in these upcoming internationals, could Hodgson seriously risk him for an entire tournament in Brazil?

As it stands, England’s loss is United’s gain – and could be a major boost for Ferdinand’s ambitions of following in Ryan Giggs’ footsteps and extending his career at Old Trafford beyond his mid-30s.

His current contract expires this summer, yet it is notable that Giggs – aged 39 – has agreed a one-year extension before his younger team-mate.

Giggs retired from international football six years ago, and has since won three Premier League titles, the Champions League and two League Cups, as well as being named PFA Player of the Year and BBC Sports Personality of the Year.

And Ferdinand cannot have failed to recognise his performance levels during his own international exile.

He may not have officially retired from England duty – but the last 12 months have coincided with some of his most consistent form for United in recent memory.

His performances against Real Madrid in the Champions League were enough to convince Hodgson to offer him an international lifeline, yet the England manager’s decision to overlook him for the past year may well have been a contributing factor to his renaissance.

But that will be of little comfort to Hodgson as he attempts to patch up his defence – without the nation’s most in-form centre back.