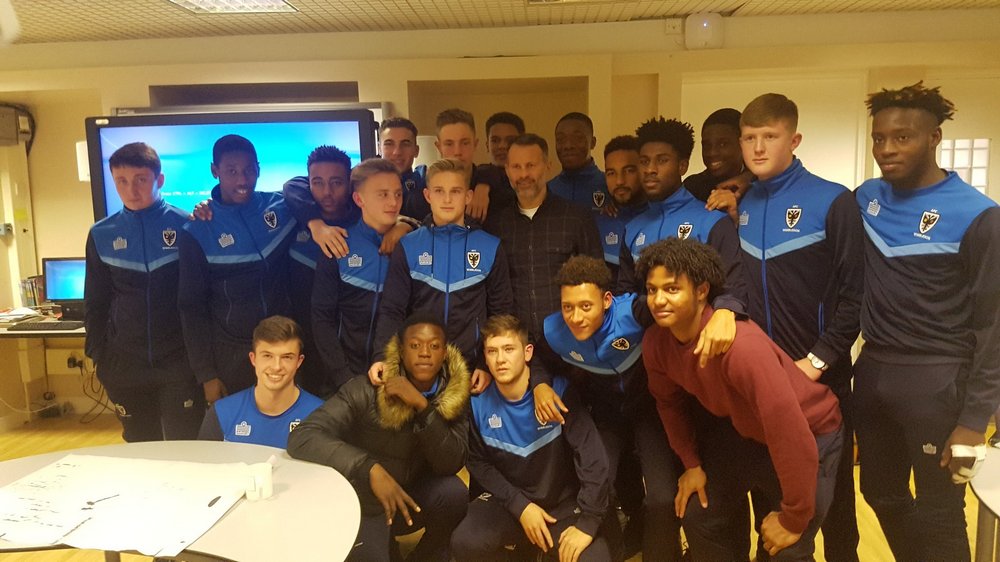 Just days before the U-18s travel to Huddersfield for an FA Youth Cup third round tie, the man who won the competition as part of the famous ‘class of 92’ popped along to Southfields Academy to offer inspirational words.

Ryan took part in a Q & A with young Dons asking plenty of questions, including how best to prepare for a big game and dealing with the pressure of being a young footballer aiming to make the grade.

Under-18s manager Mark Robinson had asked his players to prepare questions for a ‘former professional footballer’, without giving away his identity!

During an interview afterwards, which can be viewed on our official You Tube channel via the link above, Ryan said: “They are young players trying to make their way in the game and I have experience of what they are going through. It is a big game for them on Saturday and it will not be easy for them going up to Huddersfield. I understand the lads had a good run last year in the competition so they will be looking to better that.

“The message I gave them was to prepare in the best way that they can. If you get beaten on the day by a better team, you have to hold your hands up. You don’t want to come off the pitch wishing you had trained or prepared better. They have to do the best that they can.

“Twice we got beaten in the FA Youth Cup against Sheffield Wednesday and Tottenham, I was devastated because you are thinking you will never win it. Fortunately, we went on and won it with a special group of players.”

Now involved as an owner at National League North club Salford City, Ryan is full of admiration for the AFC Wimbledon story and he recalled those old battles against Wimbledon in his playing days!

“That’s exactly what they were – battles! It was always a test. When we played them it was at Selhurst Park because Wimbledon had moved from Plough Lane. We were up against a big, physical team, including Vinnie Jones and John Fashanu. It was one that we enjoyed though because we always knew it would be a challenge. We knew we had to be up for it. They were the games we had to win to win the league.

“With the lads from ‘class of 92’ I am now involved in making big decisions, but at the moment I’m just a fan who is trying to make the club better. We are trying to make the facilities better and give Salford, a city where I grew up, a football team to be proud of.

“You can always look up to a club like AFC Wimbledon, who started from the bottom and made their way up the leagues. That is what we ultimately want to do. We want to get into the league as quickly as we can. It’s not going to be easy, but it can be done.”

Mark Robinson was grateful to Ryan for taking the time to deliver key messages about what it takes to become a professional footballer.

“A parent of one of our players in the Under-14s knows Ryan as he was involved with him in setting up a hotel in Manchester,” said Mark. “We were chatting one day, he knows the stuff we are doing with the academy, and he said that if we wanted Ryan to come down when he was in London it would not be a problem. I was a little bit shocked and he rang me and said, ‘what about Monday?’ I said that would be perfect with it being FA Youth Cup week.

“Ryan was an absolute gentleman and hopefully it will help with our preparation for Saturday. What was most important to me was that it was educational. I know it is Ryan Giggs, but it was really important that it did not become a circus. I just told the boys that someone would be coming down to talk about mentality and what it takes to become a professional footballer.

“The messages that came across were fantastic. We have got loads of experience in and around the training ground and the boys always get positive messages, but to have them reinforced by someone who I would say is in the top-10 British players of all time was fantastic.”