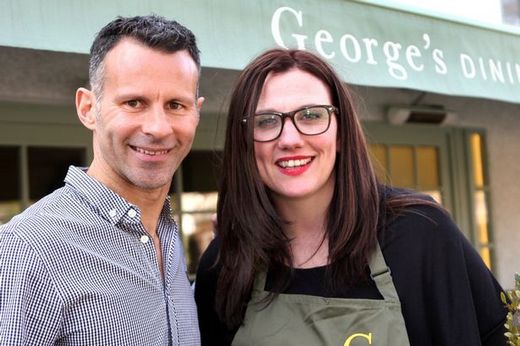 Winner of the Channel 4 cookery show The Taste Debbie Halls-Evans who celebrated her win at Georges Dining room and bar Worsley, with Ryan Giggs.

United star Ryan Giggs raised a glass to The Taste winner Debbie Halls-Evans’success as she celebrated her victory at his George's restaurant in Worsley .

Debbie, from Horwich, Bolton, will join the kitchen at George’s as a guest chef following her victory on the Channel 4 cookery show.

Ryan, who took over the restaurant – formerly known as Milan – in December, said: “We’re happy to be hosting this in celebration of what she’s achieved on the programme.

“The team here are definitely open to her ideas. Our head chef Andrew Parker is a young chef and that’s his forte – he wants to try new things – and that’s the kind of restaurant we are.”

Debbie, who used to own and run Bolton cafe Delicieux, had had no formal training before the show. But under the tutelage of Italian chef Ludo Lefebvre, she beat professionals and home cooks alike to the title.

“There were times I struggled with his bombastic style but he’s like a great personal trainer – he pushes and pushes you to get the best from you.

Debbie was also full of praise for her mentor’s fellow judges Nigella Lawson and Anthony Bourdain.

“She is breathtakingly beautiful and has a wicked sense of humour, and she was very supportive.

“Anthony was just Mr Horizontal. He was brilliant. He has such a wealth of knowledge of food.”