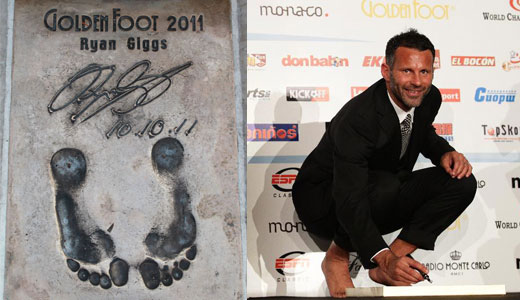 2012 has begun with many news for the Champions Promenade in Monte Carlo. The 2011 awarded players footprints are now present. Luis Figo (Portugal), Ruud Gullit (Holland), Rabah Madjer (Algeria), Abedi Ayew “Pelé” (Ghana), FC Internazionale’s captain Javier Zanetti and the winner Ryan Giggs (Wales) are all there. Wallking along the Monaco’s seafront, near the Grimaldi Forum, you will have the chance to admire the new footprints. Now they are 50, with all the footbal greats awarded with Golden Foot, representing 21 nations.

Ryan Giggs is the 2011 Golden Foot winner. The Welshman, iconic Manchester United FC midfielder, has received the highest number of votes among the ten nominees chosen by the International jury. In order, he beat Javier Zanetti, Samuel Eto’o and Xavi Hernandez. Giggs wins the golden mould with diamonds stars after being candidate for years and thanks to an extraordinary career, now celebrated by the Principality of Monaco. After receiving the award by the hands of H.S.H. Prince Albert II, Giggs has left his footprints on the Champions Promenade, the Walk of Fame of International football in the Principality seafront.