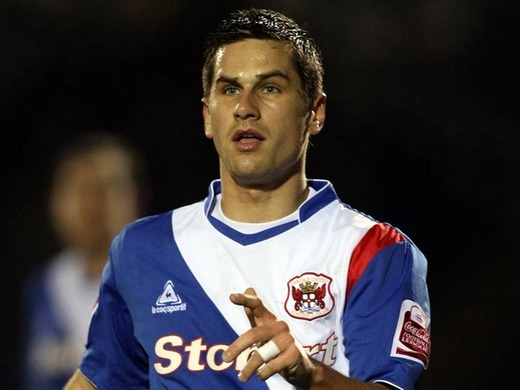 The midfield stalwart’s outstanding performances this season have helped to lead Carlisle to the fringes of the League One play-off places, and he attributes his form and fitness to practising yoga and stretches between matches.

The benefits of yoga have been promoted by Giggs and now Thirlwell hopes he can emulate the 38-year-old Manchester United legend’s longevity by winning a new deal with Carlisle.

Thirlwell, 32, who is out of contract at the end of the season, has endured terrible luck with injuries at Brunton Park.

The former Sunderland and Derby County midfielder has suffered two lengthy spells on the sidelines with knee and ankle injuries in previous seasons, but has shown his bad luck is behind him as he has been a virtual ever-present this campaign, missing only four games in October with a calf injury.

He said: “It’s going well, touch wood, and I’ve had a good run of games in the team and only missed a few early doors this season.

“I’m 33 next month and I’ve been unfortunate in recent years with injuries, but at the back end of last year I got into yoga and stretching. I got Ryan Giggs’ yoga DVD and I’ve really found it helped. I don’t feel as stiff after games. It seems to be working for me at the minute. When you’re young you think nothing can touch you.

“In football terms, I’m not young any more but I’m not near the end of my career either so it’s a case of doing the best I can to prepare my body for games.”

Thirlwell has clocked up 155 appearances since joining the Blues in September 2006 from Derby County, and revealed he would love to be part of the club’s future.

He said: “I’m really enjoying things and the focus is on making this season a good one. That’s what we are all striving for.

“The gaffer has been on record saying that once January gets out of the way with any comings and goings in the transfer window, he will look to start and address situations with lads who are out of contract.

“I’m sure in the next month-or-so he will start having a chat with a few people, so we’ll see what happens.”