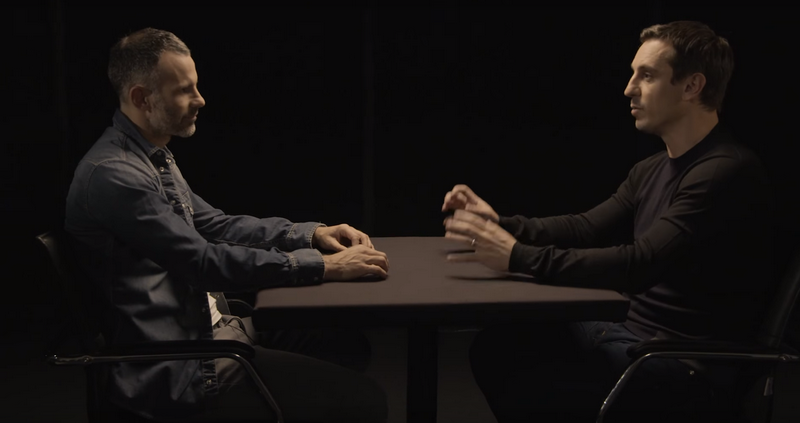 Ryan Giggs and Gary Neville are two of the best players to have graced the Premier League.

Between them they have won over 40 major trophies, a host of international caps and played with and against some of the best players in the world in careers spanning three decades. They've also watched a few before their time.

So they are well placed to pick an XI from FIFA 16 Legends on Ultimate Team. Picking players in a 4-4-2 formation, the two United icons talk through a shortlist of players for each position before settling on one.

With Giggs and Neville moving from the pitch and into the world of coaching, the way they pick this team gives a slight insight into how they go about selecting a team.

During the conversation, Giggs reveals he cannot pick two players because they broke his nose, while one prolific Liverpool goal scorer is ruled out on the basis that he played for Liverpool.

The full discussion between Neville and Giggs is below and shows how they ended up picking their ultimate XI.

Ryan Giggs: I’ve always gone Schmeichel, because when we played with him, he was a goalkeeper who won matches.

Neville: I liked them both because they saved my backside on numerous occasions.

Giggs: I know. I think Pete at the time was the best goalkeeper in the world.

Neville: We agree. Schmeichel it is.

Neville: For left back we have Roberto Carlos or Paolo Maldini. Even though Maldini is a centre back in FIFA’s Ultimate Team, we have to consider him at left back. He was 6ft 3in, quick, good in the air, organised.

Neville: A bit like me! Roberto Carlos completely transformed my mind about how full backs should be playing, he was going forward all the time.

Neville: I’d put him in straight away, Cannavaro. Because I think those other three needed someone like him alongside them.

Giggs: I once played for Wales against Italy and Cannavaro was centre half and I didn’t have a chance against him.

Neville: Cannavaro is in.

Giggs: Laurent (Blanc) had a big effect on us on how you should manage yourself as a footballer.

Neville: Beckenbauer is obviously an incredible German legend. But I think I would go for Bobby Moore just out of respect for an Englishman who has lifted the World Cup.

Giggs: I’ll go with that.

Neville: Right, right backs, this is my corner. It is me or (Javier) Zanetti.

Giggs: Zanetti is the best right back I played against.

Neville: We have known each other a long time, I think it is important we look after each other, and we are going to have to pick the left wing in a minute by the way.

Giggs: He actually broke my nose.

Neville: So you want me in there definitely if he broke your nose.

Neville: Gary Neville is in!

Neville: Left wingers, you’re on. You or Robert Pires?

Giggs: He is a better goal scorer than me.

Giggs: I can work with anyone.

Giggs: I have worked with slow left backs, not going to name names.

Neville: You’re not going to throw things at my brother there are you? You had more of an all-round game than Robert Pires. The work ethic, defending, running back, tackling, those slide tackles.

Neville: We now need to balance it out in central midfield and we have two to pick from out of four. We have (Roy) Keane, (Patrick) Vieira, (Gennaro) Gattuso and Deco.

Giggs: If you want a defensive player, a leader, you have to have Keane in the team. Deco would cause a problem.

Neville: Is Gattuso not even getting a mention?

Giggs: No, because he broke my nose as well.

Giggs: I thing we are going to have to go with George Best. He was a brilliant player, worked for the team, goal scorer, made goals

Neville: As United fans it has to be George Best

Neville: This is your game now up front. You have got (Robbie) Fowler, (Teddy) Sherringham, Pele, (Ruud) Van Nistelrooy and (Dennis) Bergkamp. Is there a certainty among that?

Neville: A man who won three World Cups, what a career, scored a thousand goals. He has to be in.

Giggs: Even though he was a brilliant goal scorer, I think we can rule Robbie Fowler out.

Neville: Van Nistelrooy was an unbelievable goal scorer. I think Pele is the goal and we need a link player. As a right back, Teddy would always be there, you would just float those nice, not even nice balls, even bad balls he would make into good ones. Bergkamp had strengths that Teddy didn’t have. He was better on the half turn, quicker, could probably beat a man. Being objective we have to look at that. Bergkamp or Sherringham?

Neville: That is an absolutely unbelievable team we have picked. And me.

Neville: Got myself into that team, I can’t believe it. I’ve won the lottery.