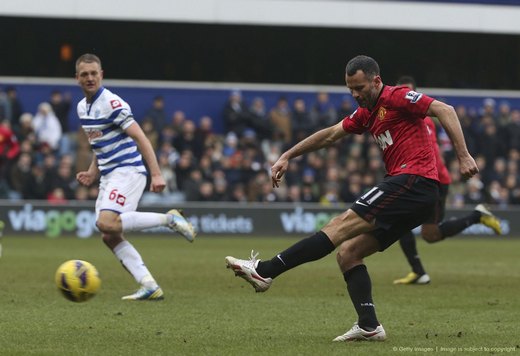 It may have been his 999th competitive game but Ryan Giggs achieved a notable first at Loftus Road.

The Manchester United legend was described as ‘boring’.

Now Giggs has been called many things during his extraordinary top-flight career, most of them complimentary.

Yet that was the word that came out of his team-mate Rafael’s mouth as he attempted to describe the 39-year-old Welshman’s wizardry.

Giggs put the cherry on another sensational showing by scoring the second goal that sealed United’s comfortable win.

Rafael, who was just five months old when Giggs signed his first professional contract at Old Trafford in December 1990, said: “Ryan is an unbelievable player. Every game you see him, he works hard, scores goals and makes assists.

“He is such a good player it is getting boring.”

You can understand what the Brazilian was getting at.

We have seen this kind of display from Giggs hundreds of times down the years. From when he first burst on to the scene as a floppy permed left winger to his current guise as a greying around the temples central midfielder.

If you love football you will never tire of seeing the Premier League’s most decorated player in his pomp.

Unless, of course, you happen to be a Manchester City fan or it is your team on the receiving end.

Giggs did to QPR what he has done to countless teams over the years as he took a giant stride towards to an unmatched THIRTEENTH Premier League winners’ medal.

And with the old boy showing no signs of slowing, maybe he should have made a slight detour on his way back through London to ask Arsenal if he could borrow their trophy cabinet.

Well it is not as though the Gunners use it any more.

As for United’s, after remaining closed last season, it looks almost certain it will be opened again in May.

It is going to take a either a minor miracle or a major catastrophe for runaway leaders United to be overtaken at the top of the table. Giggs sealed this victory 10 minutes from time as, like a spring chicken, he sprung the Rangers offside trap before drilling a shot into the bottom corner — just like he did when he was 19.

Rafael, 22, added: “He is the same in training, he just loves to play the game.

“He is one of the top players that I have played with.

“He gives us experience, confidence and when you are feeling bad he comes and helps you, especially young players.

“Sometimes young players find it tough going and he helps them to show how to do it.

“He knows it from playing for 22 years. He pulls the player aside and gives him advice.

“He spoke to me a lot when I was young.”

It was Rafael who put United on their way to victory with one of the strikes of the season in the 23rd minute.

But as the ball bounced out of the area and upfield with plenty of pace, Rafael returned it with interest as he spectacularly fired it back into the top corner from 30 yards.

He said: “It was a very good day, we are very happy. I saw the ball coming towards me, I just hit straight through it and knew it was in the moment I hit it.

“You just get that feeling and I didn’t want to blink in case I caused it to miss. I can’t remember scoring as good a goal. I scored against Liverpool but it was not the same. I curled the ball then.

“This is my third goal and we are getting the points.

“You can see when you get a cleansheet and then another one it builds your confidence.

“So that is what is happening. We are getting very consistent.

“I will watch my goal and everyone will say ‘what a goal’. I am very happy.

“The second goal was important, you never know what will happen, but the second was a good goal.

“We know what happened last season and we want to win every game. All games are important.”