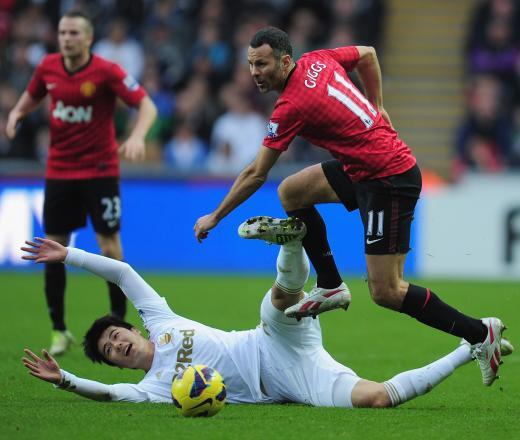 Ryan Giggs is the perfect example of a player who has adapted his game to enable him to play at the highest level, despite the inevitable slowing that comes with age. It makes sense for him to captain this veterans team.

The Independent reported that Giggs recently became the first player to complete the mandatory qualification for Premier League and Champions League managers while still playing. His ability to manage a game for Manchester United is not in question, but now he is taking steps toward managing the entire club.

There are a great number of veteran players to choose from when compiling a list like this. These players continue to turn out great performances and command respect from the entire footballing world.

Let's get stuck into the team selection.

This isn’t even a slightly difficult decision to make. Gianluigi Buffon has been an incredible servant to Italian football and at 34, has just extended his deal with Juventus through the 2014-15 season (via UEFA.com).

Captain of both Juventus and the Italian national team, there’s no other veteran goalkeeper who can compare with Buffon.

Being a veteran player isn’t always about age—experience counts for a lot when choosing a team such as this. Some may consider Ashley Cole still a little young to feature here, but at 32 he has a wealth of experience and still remains among the best left-backs in the game.

The fact that he recently signed a one-year extension at Chelsea—a club notorious for discarding players over 30—says it all.

The two centre-back spots are taken by  Ricardo Carvalho and Carles Puyol.

Although Carvalho has barely played for Real Madrid this year—and has been told his contract will not be renewed—he still has a great deal to offer at age 34. InsideSpanishFootball.com reported last month that both AC Milan and Deportivo La Coruna expressed interest in picking up the veteran defender.

Puyol, however, has been a constant presence in the middle of the Barcelona defence, as well as operating sporadically on the right. His is a selection that picks itself, and he has recently signed a three-year extension to keep him at Camp Nou until 2016 ( via Goal.com).

Javier Zanetti slots into the team at right-back, which again is an unsurprising move. Zanetti is 39, but still performs at an extremely high level for Inter and expects to continue his career into his 40s. When speaking to ForzaItalianFootball.com, Zanetti outlined his plans:

It’s my intention to play for another season. It’s all heading in that direction. It wasn’t a decision made on a particular day, but it occurred to me during our run of 10 straight wins earlier in this campaign. I often asked myself why I shouldn’t consider playing if I thought I could still give the team a helping hand.

The first pick obviously goes on Ryan Giggs, closely followed by Steven Gerrard. The Liverpool captain was recently described by teammate and fellow Scouser Jamie Carragher as “the greatest player to ever play for Liverpool” (via The Daily Mail).

At 32, Gerrard still has the ability to dominate the midfield and has proved to be a good combination with Luis Suarez since his arrival. He orchestrated the 5-0 destruction of Norwich last week, also grabbing a goal. He’s just too good to leave out of this team.

Despite his retirement from international football, Mark van Bommel deserves a place in the side. Captaining PSV Eindhoven is still an impressive achievement at 35, and his performances retain the no-nonsense style he is renowned for.

With Gerrard on the right and Giggs on the left, Van Bommel sits nicely in the middle and shores up the midfield.

There were recent rumours that linked him with Arsenal, but for now the only place Diego Milito is moving to is this imaginary veterans’ team. At 33, Milito is once again enjoying a positive season with Inter, despite a knee injury that has recently kept him on the sidelines.

Miroslav Klose, too, shows no signs of decline, and in fact a recent Goal.com study showed that Klose has the best shot-to-goal ratio of any striker in Europe, with the German hitting the net an impressive 32.26 percent of the time for Lazio.

The final place on the team is taken up by Antonio Di Natale. A true talisman for Udinese, Di Natale was on target twice as his team rocked Inter with a 3-0 victory at the beginning of 2013, and his strike rate of 14 goals this year makes him impossible to ignore.