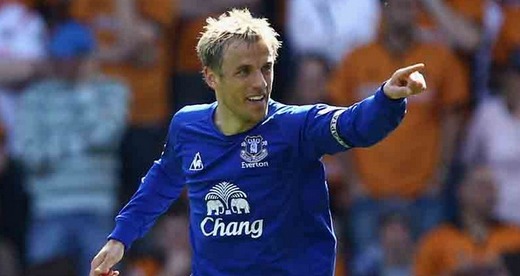 Everton captain Phil Neville is planning to take inspiration from Ryan Giggs and keep on defying the years.

At 37 years old, veteran Giggs is still a key performer for Manchester United and has committed to at least one more season at Old Trafford.

Defender Neville spent a decade as a United team-mate of Giggs before making the move to Goodison Park six years ago.

And the 34-year-old wants to emulate his former colleague by carrying on playing for as long as he can.

He said: "At my age you tend to take it one season at a time but I feel as fit as I ever have. I can go on for at least another two or three seasons.

"I look at someone like Giggsy and he is an inspiration to all of us.

"He looks as fit and quick as ever and is still one of the best players in the Premier League.

"I am trying to follow his example and do all the right things. I have got one year left on my contract and when I come back for next season my plan is to be ahead of everyone else, to be fitter than everyone."

Tottenham attempted to lure Neville away from the Toffees in January, but the former England international was not tempted by a move.

He added: "It was simple. Spurs came in with a bid and Everton said 'no.'

"As captain I was in a great position, I knew that and love playing for this club."