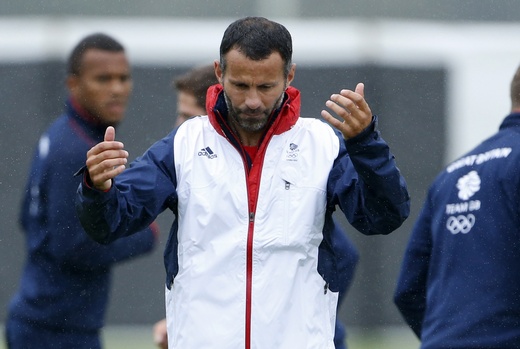 Ryan Giggs will be fit for Team GB's Olympic quarter-final against South Korea on Saturday, Stuart Pearce has confirmed.

Giggs sat out Great Britain's 1-0 victory over Uruguay on Wednesday afte scoring against the UAE in their group stage match.

Though midfield trio Joe Allen, Tom Cleverley and Aaron Ramsey controlled the tempo against Uruguay, Pearce insists Giggs will come back into contention for a starting spot against South Korea.

"He is certainly fit and available," Pearce said. "We trained this morning, including the players that didn't feature or didn't start.

"Ryan did the training with no problems at all, so he is up for selection again on Saturday, as are all the other players."

Pearce also admitted he has started to look at the London 2012 Games as an opportunity to boost his managerial credentials as Team GB edge closer toward a podium finish.

"At this moment in time as a manager I've won nothing, I feel as though I'm still learning," Pearce said.

"When the dust settles, and you look at what Sir Alex Ferguson has won and what Arsene Wenger has won, and top managers in the world and you look at their CVs, I'm no different to that - I'm desperate to win, even more so for the players than myself.

"I'd say I'm quite unassuming to when it comes to the accolades being thrown out, I'm not interested in that. I'd rather the players step forward and if they can go home with a medal in their pocket I'd be delighted."