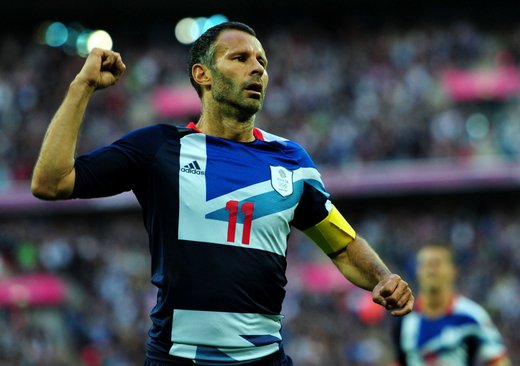 The hosts were struggling, having surrendered their first-half lead, but strikes from Scott Sinclair, with his first touch, and Daniel Sturridge gave them a deserved victory and sent UAE home.

A draw against Uruguay on Wednesday at the Millennium Stadium will be enough to put Britain through to the quarter finals in their first Olympic competition since 1972.

Pearce made three changes, including the introduction of Aaron Ramsey, which brought the Welsh contingent to five.

More importantly, it provided an extra man in midfield, which allowed GB to exert far more control than they had in their opener against Senegal.

But as against Senegal, GB's opener was crafted in the Valleys.

This time, after Ryan Giggs had fed Tom Cleverley and continued motoring into the box, the roles were reversed as Craig Bellamy provided the cross and the veteran Manchester United man rose unopposed to nod home.

UAE were a sporadic threat and if Neil Taylor had not intercepted an Ahmed Khalil pass, they would have had two men clean through midway through the first half.

But GB were creating most of the chances, and were disappointed not to be further ahead at the break.

Ali Khaseif denied Bellamy and then saved his side when some quick thinking by Ramsey presented Cleverley with a chance inside the six-yard box.

Cleverley then managed to strike both posts after meeting a Bellamy cut-back with a precise first-time finish.

It was the kind of fluency Stuart Pearce had promised would eventually come to the squad once they were given a chance to get to know each other. The side are relative strangers compared to almost all the teams in the tournament.

The introduction of Sturridge almost paid immediate dividends, as he was set up by Ramsey, only for Khaseif to block his angled shot.

The Chelsea striker failed to take another opportunity before GB were hit by a sucker punch on the hour as Rashed Eisa took advantage of a fantastic defence-splitting pass from Omar Abdulrahman. Eisa raced onto it and gleefully beat Jack Butland.

The goal turned what should have been a routine win into a nervy search for salvation, as a side which seemingly offered no threat, were suddenly looking dangerous with every attack.

And it turned out to be a masterstroke.

With his first touch, Sinclair was on hand to tap home as a Bellamy cross created panic in the UAE box, Khaseif succeeding only in pushing it straight to the Swansea man, who tapped into an empty net.

Three minutes later, GB sealed their win as Sturridge charged through, then beat Khaseif with an impudent chip from the edge of the area.