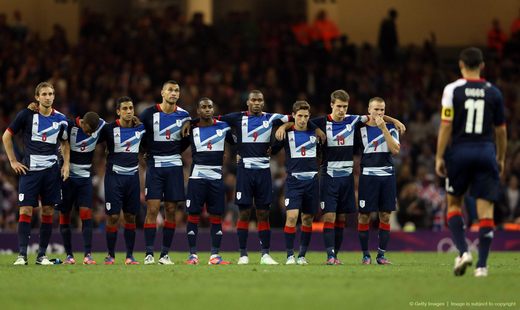 One of the greatest days British sport has ever known ended with a sadly familiar quarter-final penalty shoot-out exit to South Korea in Cardiff.

Sturridge was clearly angry and upset as he made his way off the field, although it could be argued Aaron Ramsey was equally culpable as he also missed from the spot in normal time when the Wales midfielder had a chance to put Britain in front.

That Ramsey should score in the shoot-out, having already converted one prior to his failure, just heightened the frustration for a capacity crowd, who had seen Ji Dong-won put South Korea in front.

Much like their female counterparts 24 hours earlier, GB had been forced onto the back foot by quick, dangerous opponents.

Jack Butland made an excellent save to deny Ji, then Park Jong-woo fired over from the edge of the area before Arsenal's Park Chu-young got above Joe Allen without being able to keep his powerful far-post header down.

Given their dominance, it was no surprise the Koreans grabbed the initiative, although, after an eye-catching tournament to date, Butland let himself down by failing to make what, despite the pace of Ji's shot, appeared a fairly routine save.

Half an hour elapsed before GB put together their first attacking move of any significance and when that ended with an unfortunate ricochet off Craig Bellamy, Stuart Pearce's men looked to be in for a long night.

Colombian referee Wilmar Roldan then awarded the hosts two penalties in the space of four minutes which should have turned the match on its head.

The first was for a handball by Oh Jaesuk as he slid in to block Ryan Bertrand's shot, earned a booking and triggered a shoving match between the sides as Kim Young-gwon scuffed up the penalty spot.

Sturridge was then clearly brought down by a high tackle from Hwang Seokho. Ramsey has been a decent penalty taker for Wales. But on both occasions here, he looked awfully nervous. Initially, he got away with it as his first shot crept under Jung Sungr-yong's body.

Second time, the midfielder was not so lucky. He went for the opposite corner, Jung read it, and palmed it away, a posse of defenders sweeping in to clear.

At least the shift in fortune made for a more positive approach from GB and a sparkling run and cross from Bellamy was inches away from being turned home at the near post by Tom Cleverley.

Richards was threatening inside the Korean box when he collided in mid-air with keeper Jung, an incident which ultimately resulted in both men being replaced, with the Manchester City defender looking particularly uncomfortable.

Celtic defender Ki Sung-yueng and Kim both failed to hit the target with decent opportunities before substitute Craig Dawson flattened Kim with a vicious strike the Korean defender had the misfortune to get in the way of.

As the crowd started to get impatient, demanding the introduction of Ryan Giggs to what had started as an unchanged line-up, Ji was unable to turn home a far post corner.

Giggs was finally introduced with six minutes remaining but could prevent the outcome requiring an additional 30 to be determined.

Ramsey should have turned home Sturridge's cross before South Korea burst back in to life and after Butland had only been able to parry Koom Ja-cheol's shot, Ji somehow guided the rebound wide when it seemed easier to just head into the corner.

The Sunderland man continued his wasteful ways, but then again, so did Sturridge as a succession of openings came and went.

It had to come down to penalties. Jessica Ennis, Greg Rutherford and Mo Farah had shown the way. Unfortunately, the footballers could not follow.