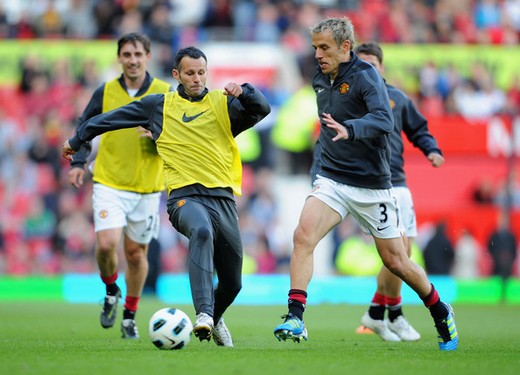 Everton manager David Moyes has backed his captain Phil Neville to achieve his dream of another two or three years at the top level of English football.

Neville, who celebrates his 36th birthday next month, made his 500th Premier League appearance in the 2-1 win over Wigan on Boxing Day. His next target is to reach 700 career appearances, which he needs another 14 games to do.

The former Manchester United man demonstrated that he is still in good shape by returning from knee surgery three weeks ahead of schedule to play in the 2-1 win at West Ham last Saturday. And he is set to play a significant part when Everton host Chelsea in the Premier League on Sunday.

"The pleasing thing is that I have still got the hunger and desire to play on for two or three seasons," Neville told the Liverpool Echo on Friday. And Moyes reckons that the Everton captain could challenge his former United team-mate Ryan Giggs in the Premier League longevity stakes.

"I think he could, with the way he's looked after his body," Moyes said. "He's just returned from a knee injury, so we've got to make sure that's right. But I think overall, he's somebody who has conducted himself off the field to get that longevity.

"I think whatever happens, Phil could easily play on for two or three years, he's in really good condition."

Moyes is looking forward to renewing rivalries with former Liverpool boss Rafa Benitez, who will be in the opposing dug-out as Chelsea's interim manager.

"I think he always wanted to be back in the Premier League," Moyes said. "He enjoyed his stint here. I think, like a lot of people who come into the country, he enjoyed the honesty, and the way the Premier League is played. He's bided his time, Rafa, to get another job. Good on him, he's at a very good club."

Moyes, meanwhile, dismissed a report in Friday's Independent newspaper, which stated that Chelsea were considering a move for left-back Leighton Baines.

He said: "You wouldn't believe whatever's in that paper, would you? I don't read the paper, first of all, but if I did, then I wouldn't comment on it, anyway."