Manchester United they stand: What happened to the United heroes of 1992? Ask Salford FC 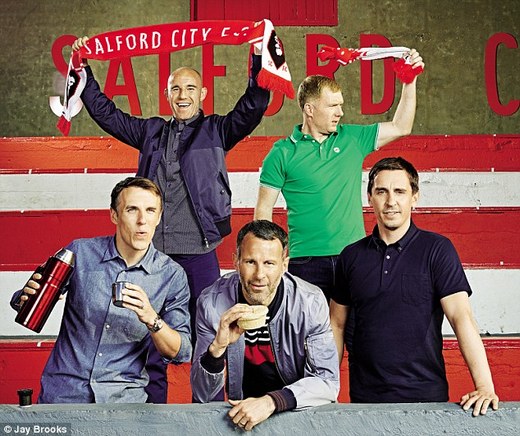 Ryan Giggs and Man United’s legendary Class of 92 have a new goal – propelling a tiny non-league team into the big time. And there’s not a personal assistant in sight as they pump up balls and take the meat pie orders... man-marked all the way by a documentary TV crew

Gary Neville shakes his head with a sigh.

The 40-year-old England team coach, Sky Sports pundit and Manchester United legend, winner of eight Premier League, three FA Cup and two Champions League titles (not to mention England’s 13th all-time most capped player and arguably finest ever right-back), is reliving one of the most testing and difficult nights of his trophy-laden career: ‘I had 12 hours to get hold of 400 pies.

'It was madness. But we’d promised our fans a free pie and a pint night at a midweek game, so I just had to get onto Pukka Pies and get it sorted.’

Welcome to the nitty gritty of non-league football. Where the catering is strictly bargain basement and the centre forwards usually plumbers.

Where even multi-millionaire owners have to get their hands dirty. Even if they happen to be five of the greatest players ever to pull on a Manchester United shirt.

Gary, and his brother Phil, together with their former United teammates Ryan Giggs, Nicky Butt and Paul Scholes, once formed the backbone of the most lauded team in world football – the Manchester United side that accrued trophies like today’s Premier League players collect tattoos, culminating in the Champions League triumph of 1999 to complete the Treble.

Collectively known as the Class Of 92 (the year all played in United’s FA Youth Cup winning side), they reunited last year to buy local non-league team, Salford City FC.

The missing member of the Class, a certain David Beckham, was otherwise engaged in Miami setting up his own club. 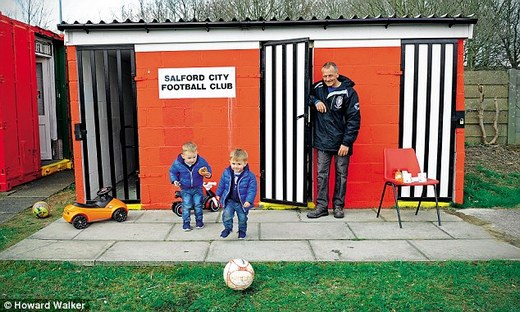 Caretaker Jimmy at the club's Portakabin with his grandsons. Salford City fans shouldn’t expect an array of former United stars to start trotting out of the home Portakabin however

Today, the famous five are back at Salford City’s tiny Moor Lane ground to launch Class Of 92: Out Of Their League, a three-part BBC documentary that follows their first season as club owners. Unlike most football documentaries, this is no sanitised advert for the club.

It’s a warts-and-all affair, with cameras following the boys’ every move behind the scenes.

In one brutal scene, the manager is filmed being fired. In another, star striker Gareth Seddon is interviewed sitting on the dressing-room toilet, minutes before a big game. Talk about access all areas.

While the documentary is refreshingly candid, the question remains why five legends with a combined net worth of £90 million, took charge of a ramshackle club, formed in 1940 but languishing in Division One North of the Evo-Stik Northern Premier League, the eighth tier of English football – a club with average gates of 383, two Portakabins for dressing rooms and which was only ever close to success when United’s old training ground was just a free kick away?

‘It’s an area we grew up in, so it’s about us giving something back,’ says Phil Neville, 38, the former versatile defender, renowned for his dependable right foot and questionable hairstyle, sitting in the newly painted but decidedly humble surroundings of the ground’s only (and tiny) stand. Not so much the ‘Theatre of Dreams’ as a ‘Potting Shed of Hope’.

‘It’s a perfect way to help grass-roots football in an area that means so much to us. Salford’s the only city without a team in the League.

'What a great journey it would be to try and rectify that.’

But Salford City fans shouldn’t expect an array of former United stars to start trotting out of the home Portakabin. 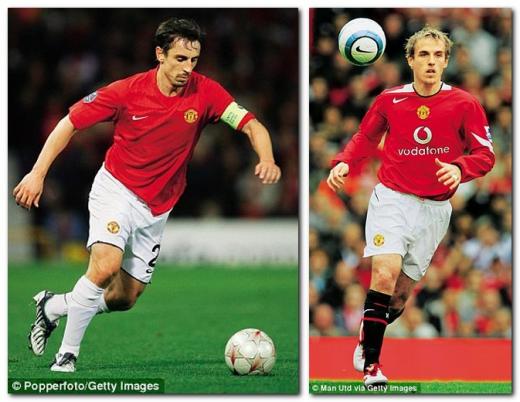 ‘That wouldn’t be realistic,’ says Phil, earnestly. ‘Football is as serious at this level as it is in the Premier League.

'If you start treating it as a testimonial game for a load of former pros, you’re asking for trouble.

'We’re all unfit and past it, so you won’t see us or the likes of Ruud van Nistelrooy pulling on the shirt.’

The series reveals that, off the pitch, Gary Neville is exactly as he was on it. No nonsense, combative and a natural leader of men (not to mention purveyor of Pukka Pies).

Captured on film pacing the corridors of his gated mansion, he’s a perpetual blur of motion, firing off business emails throughout the small hours of the morning, leading his wife Emma to call him a control freak on camera.

Watching these Man Utd legends arrive at the ground in a succession of top-of-the-range 4x4s, the modest surroundings must surely be a huge culture shock for a group with over 300 international appearances between them, more used to the manicured pitches of the Premier League?

With all five of the boyhood pals sitting around a table in the compact, homely club house, talk turns to those early apprentice years in the youth team, where lifelong bonds were forged, and terrifying initiations endured.

Soon the stories are pouring as freely as the tea being dispensed from the giant steaming tea urn in the corner.

‘As an apprentice, you were assigned certain duties, like cleaning the first-team dressing room and mopping out the filthy baths,’ says 40-year-old Paul Scholes, who despite being an asthmatic and looking more like someone you’d see behind the counter in Greggs rather than a professional footballer, was the most revered and gifted English midfielder of his generation.

‘Imagine a bath after 22 players had been in it. The youth coach would check every inch to ensure you’d done it thoroughly and you wouldn’t be allowed home until he was satisfied.’

‘One of my jobs was to pump up the balls,’ says Giggs. ‘If you hadn’t got the exact pressure, Peter Schmeichel [the volatile and imposing 6ft 3in United goalkeeping legend] would kick them in the river next to the ground and shout at you to go and get them.

'Next time you made sure the balls were right.’

Other punishments included being thrown into a tumble dryer, or being stripped to your pants and having a United kit daubed on in dubbin.

‘You’ve no idea how long it takes to get dubbin off flesh,’ laughs Phil Neville. ‘The only way is with a wire brush.’ 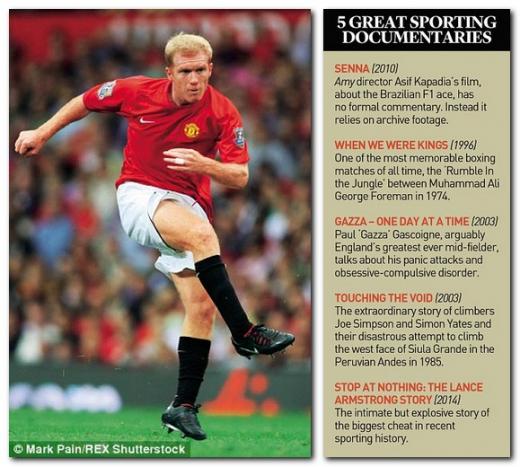 My initiation was to dance with another apprentice, pretending he was a girl,’ grimaces Giggs.

‘The first-team players would stop the music and you’d have to chat your team-mate up. It was hideously embarrassing but you knew it would only last a minute and then you’d be accepted.’

‘Mine was similar,’ laughs Gary Neville.

‘Except the first-team players put a lifesize cut-out of United player Clayton Blackmore on the treatment table and you’d have to dance round the table and then pretend to make love to the cut-out. Excruciating!’

Paul Scholes, as quiet and unassuming in person as he is in the documentary, has fallen ominously silent.

‘Some of the things I had to do I daren’t reveal because people will get into trouble,’ he sheepishly offers.

‘I can’t tell you about my initiation. It was that bad. But if you didn’t do it, it’d be worse in the long run because they’d keep on at you.’

Nicky Butt, 40, head of coaching at the Manchester United Youth Academy and former tough-tackling midfielder described as ‘England’s best player’ by that legendary hardman, er, Pele, is more forthcoming: ‘I had to run around a snowy pitch naked in front of the first team.

'It was a way of testing what you were made of. But a week later you’d passed the test and were part of that close-knit group.

‘No one does it at clubs these days because it’s frowned upon. Maybe that’s what a lot of kids are missing because they don’t have a relationship with the first team players.’

As the quintet head for the terraces to pose for photos in matching blue suits and white shirts, looking like the world’s worst Take That tribute band, Jimmy, the long-serving caretaker, reflects on the changes the club has seen.

‘The boys have had such a positive effect,’ he says in a deep Mancunian drawl.

‘Our minibus used to take players and fans to away games – it was a 17-seater! These days, we take a coach.

‘On and off the pitch, we’re more professional. The playing surface and the facilities are so much better. Gary even got Sky Sports in the clubhouse.

‘Although it wasn’t working so I had to phone Sky. They couldn’t find an account for G Neville, so when I said, it’s the Gary Neville, the woman on the phone at Sky said, “Who’s Gary Neville?” I didn’t dare tell Gary that!’

As the documentary shows, their first season wasn’t without controversy. The manager was sacked and replaced by the Class of 92’s choice, Anthony Johnson.

‘It was the one dark moment,’ says Gary Neville. ‘But it was unanimous between us and the committee.

'We have to prove over the next few years that we’re not owners who just move managers on willy-nilly.’

There was also scepticism from fans after they sold 50 per cent of their shares to Singaporean businessman Peter Lim, a billionaire who once tried to buy Liverpool FC.

‘We haven’t got the money to do what we want to do on our own,’ explains Butt.

‘We know and trust Peter and need his input to take the club to the next level.’

And they’re on the march. Their first season saw attendances rocket by 40 per cent as Salford won the title and promotion to the Evo-Stik Northern Premier League Premier Division, the highest level ever. Not that they intend to be stuck in the Evo-Stik.

‘Our ambition is to get into the Football League, with a 25,000-seater stadium,’ states Giggs firmly.

‘We’re not saying it’ll be easy or quick but we’re in this for the long haul. This is our baby. Why not aim high?’

So how about a new Premier League Manchester derby for the year 2030 – Manchester United v Salford City?

With the Class of 92’s track record, don’t bet against it. 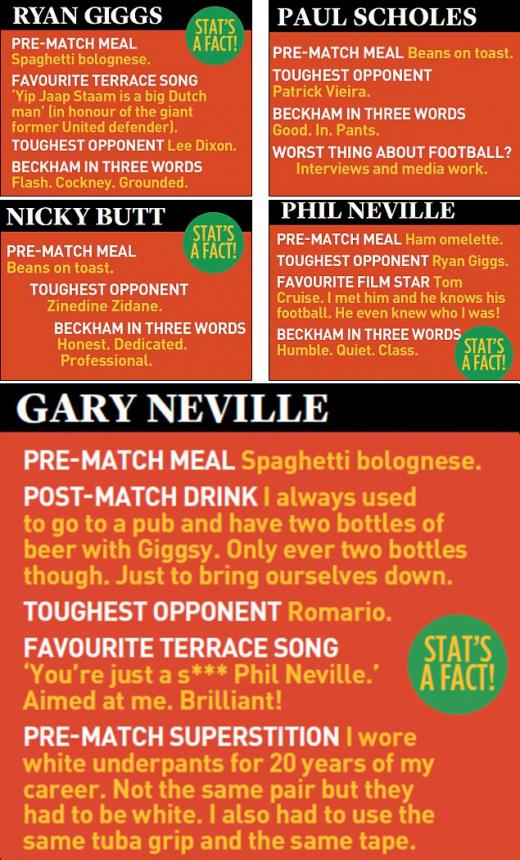