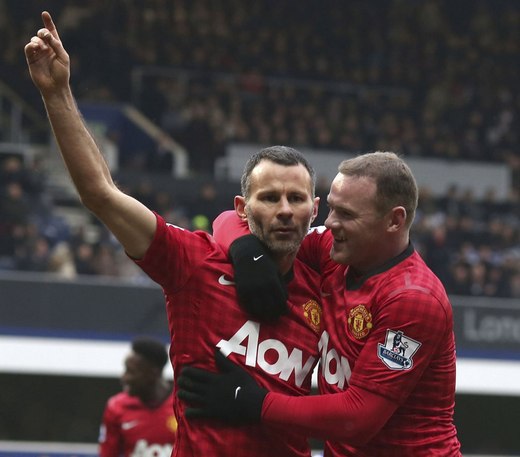 Giggs, making his 999th appearance in senior football (931 for United, 64 for Wales, four for Team GB), scored the game's second goal to seal three vital points in the race for the Barclays Premier League title.

Irwin and Macari, speaking on MUTV's Matchday Live programme, waxed lyrical about the Welshman following a performance that earned Giggs a nomination in ManUtd.com's Man of the Match poll.

"There have been times this season, last season and the season before when people were writing him off but he's a top professional," Lou Macari said. "He keeps bouncing back and doing what he's done at QPR. Did he look nearly 40? I don't think so. He flew about the pitch, he got on the ball, his passing was good.

"The biggest indicator as to how good he is: the manager keeps picking him. Sir Alex doesn't mess around here at Manchester United. He lets players go at times when supporters aren't sure why, but he knows things we don't know.

"It's the same for the people he keeps. If he keeps Giggs and Paul Scholes that's because he has a belief that they have something to offer. And they go out onto the pitch and prove the manager's right. To write Giggsy or Scholesy off is a silly thing to do. They can have a poor game, but that happens to the best of players, let alone players approaching 40 years of age."

Denis Irwin added: "He's dedicated, too. You should see him in training. And don't forget, he started as a winger, an out-and-out winger who ran up and down the touchline, scoring goals, creating goals.

"He was in the centre of the park on Saturday and he got around and did his defensive duties well. Like Lou says, he's good enough to play. If he wasn't good enough for this club the manager wouldn't play him.

"Sir Alex trusts him, he knows it's going to be a tough game and yet he sticks him in the centre of the park and he scores a great goal. He's a fantastic player, he really is.

"To play 999 games is unbelievable. He had problems with his hamstrings in his 20s but then started doing yoga. That sorted it out. Obviously the manager's been careful with him over the last eight or nine years, but he's an incredible athlete. There's not an ounce of fat on him.

"He looks after himself, he trains as hard and intense as he plays on a Saturday. Young players can learn bundles off Giggsy and Scholesy through the way they train and the way they are in the dressing room. Ryan is a very big character in that dressing room - he's not quiet. He's a great professional and played fantastically well on Saturday."