Kyle Walker could have been sent off, insists Ryan Giggs 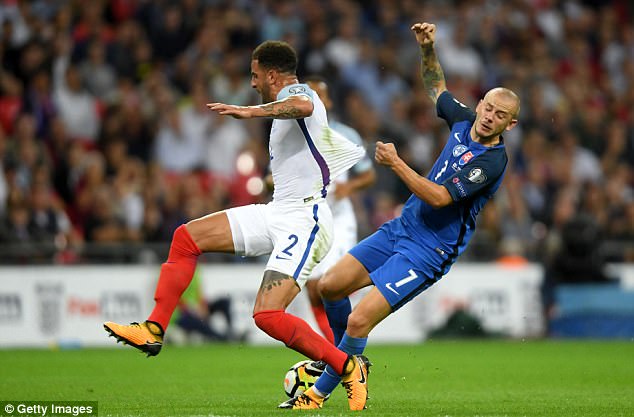 Ryan Giggs believes Kyle Walker could have been shown a red card for his challenge on Vladimir Weiss towards the end of the opening period of England's World Cup qualifier against Slovakia.

In added time in the first half with the score level at 1-1, Walker brought down Weiss as the last man with the Slovakia winger clean through on goal.

Fortunately for Walker, French referee Clement Turpin waved play on but Giggs believes the Manchester City man could have been dismissed for the tackle.

'He's not got the ball and it's a foul - Gary Cahill dives in and Weiss is free.' Giggs said on ITV's coverage. 'Walker uses his pace but it's a foul and then the referee has a decision to make on whether it's a sending off or not'.

Ian Wright believed Turpin was tricked into believing Walker made a fair challenge by the movement of the ball but Lee Dixon criticised Cahill's role in the incident.

'Going back to Cahill's challenge... if you're the last man then why are you dashing in?' said Dixon. 'As a defender you just let the play be in front of you and protect the net behind you'.

Walker, who joined City for £54million from Tottenham this summer, was at fault for Slovakia's opening goal which came inside three minutes at Wembley.

The right back broke forward leaving Marcus Rashford exposed. Rashford was dispossessed and with no cover behind him, Stanislav Lobotka was free to fire Slovakia in front after a one-two with Adam Nemec.

And Dixon slammed Walker for abandoning his defensive duties and allowing Slovakia to get in behind England's defence.

'Where Walker's going here I have no clue,' said Dixon. 'What's going through his mind? Rashford loses the ball but there are three players round him. There's no need for Walker to go forward there'.