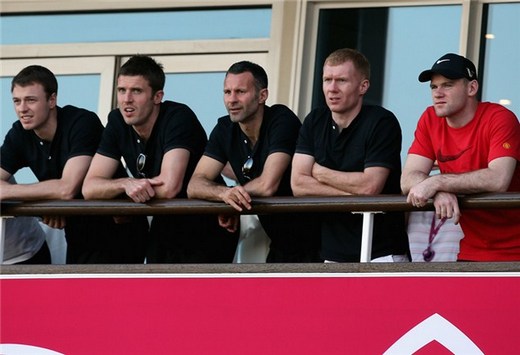 It’s not often one of the best golfers in the world stands over his approach to 18 and is star-struck by those he can see watching on from the clubhouse.

But that’s exactly what happened to Justin Rose during today’s opening round of the Qatar Masters when he saw the calibre of his gallery.

Three-wood in hand, the 32-year-old eyed up the shot in front of him and caught glimpse of some footballing idols on a balcony overlooking the green.

Manchester United have been training at the Aspire Academy in Doha this week and a few of the players, including Ryan Giggs, Paul Scholes and Wayne Rooney, decided to spend their free time taking in the other beautiful game.

And it was England striker Rooney who inadvertently came to Rose’s aid for his final approach shot of the round.

“I looked up to the balcony and I saw all these guys,” says the Englishman, who is a Chelsea fan. “They were all wearing black, but Wayne was in a red shirt – and that definitely added a bit of focus going into my shot into 18 as I tried to impress the lads.

“It was a nice way to finish.”

Rose had spotted the footballers earlier in the day as they opted to abandon the hospitality area to mingle with the crowds along the fairways.

“I saw the United guys were close to us on the par-3 12th,” he added. “I went up to them and I shook Rooney’s hand and Giggsy and the boys. Obviously they’re such legends. It’s hard not to be impressed by them.

“I’ve met a bunch of football stars over the years like Alan Shearer, Michael Owen, all those sorts of guys. Jamie Redknapp has become a friend of mine. They’re all mad-keen golfers, which is cool.”

Rose, who at World No.4 is the highest-ranked player in the field, will begin day two tied for 11th place at 4-under alongside the likes of former World No.1 Martin Kaymer and 2005 US Open champion Michael Campbell.

And it could have been better for Rose, who was penalised a stroke when he noticed his ball moved a fraction as he addressed a short par putt at 17.

Portugal’s 2012 Rookie of the Year Ricardo Santos leads through 18 holes after a stunning opening 65.