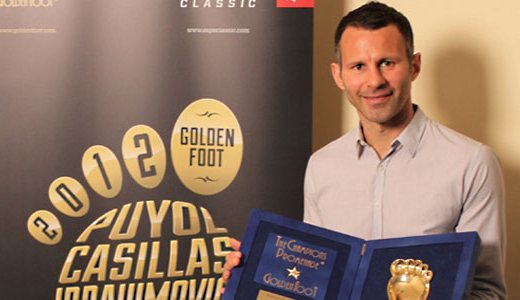 Friendly as always, the winner of Golden Foot 2011, reveals the candidates 2012, giving football fans a particular opinion about the ten champions chosen to succeed him on the Champions Promenade in Monte Carlo.

Q: The Golden Foot awards the greatest champions in football history. From this year, among them there is also Ryan Giggs who received the prize in the last edition in Montecarlo. Are you going to see your footprints on the Champions Promenade?
A: It’s beautiful and exciting to know that my footprints are on the Champions Promenade. I’m planning to take my kids there this coming summer.

Q: Giggs has won the Golden Foot with the votes of football fans. What kind of feeling you get from it?
A: I have a beautiful relationship with people, and it makes me happy to know that fans from the world like the way I play football. This award is special because of it.

Q: What kind of characteristics has to have a top player to stay on top for so long? It’s more a matter of physical or mental situations? How do you maintain A: high stimuli season after season?
A: First of all, there must be a strong passion for football, regardless of age. If you are having fun in training everything turns out well in the game too. Year after year you need to maintain consistency in training, and if you’re lucky enough to have a great manager like Ferguson, then it is much easier. Essentially I think you have always have the wish to learn from others, no matter your age.

Q: Which player at Manchester United deserves the Golden Foot?
A: I immediately say Paul Scholes. He had retired but he was not ready to retire. This is why he came back. It’s good for us!

Q: And what about champions you faced in your career? Who deserves the Golden Foot?
A: This is the time of Barcelona and its great players. To tell you the truth I would say Puyol and Xavi, but I could also cite others. What a great team Barcelona!

Q: This year it’s up to Giggs revealing the ten candidates for the 2012 Golden Foot. These are the ten “colleagues” who can leave their footprints in the history of football after you: Buffon (Italy), Casillas (Spain), Drogba (Ivory Coast), Ibrahimovic (Sweden), Kakà (Brazil), Pirlo (Italy), Puyol (Spain), Raul (Spain), Seedorf (Netherlands), Xavi (Spain). What do you think of them?

A: Buffon is one of the best goalkeeper of the last 20 years. He fills the door very well and has a strong charisma. A true champion. Casillas as well as Buffon has head and strong shoulders to face difficulties. One of the best in the world. Drogba is a devastating striker. He makes a real difference. Everyone knows it now. Ibrahimovic has quality and power. He changes the match as a little number of players in the world. I remember Kaka at AC Milan a few years ago, and even then it was unstoppable. A real top player. Pirlo is among the few able to control the game. What else can you add to players like him? Puyol and Xavi are like Pirlo. They address the game to their team. They are equal to Messi. Raul has made the history of football in the last twenty years. He has been able to score at the highest level for years. Absolutely an incredible player. Seedorf belongs to a special category of players. He is good technically and physically strong. I love it.

Salvatore Siviero They are all great players but I think Xavi deserves the award.