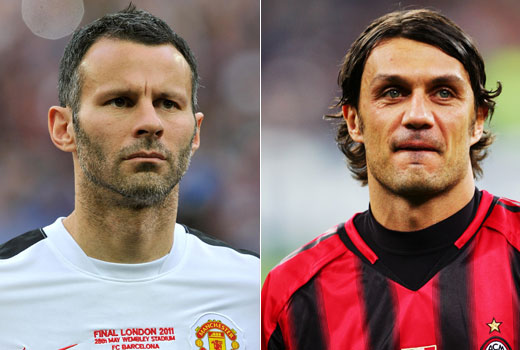 The Manchester United midfielder broke the former AC Milan man's appearance record on Monday night as he played his 903rd match for the Red Devils.

With football becoming driven by money more and more each year, the habit of breeding your own players appears to be one that is becoming less important, particularly for the bigger clubs as they look to gain immediate success. But there are two players that epitomise just what can be brought through the ranks.

Paolo Maldini and Ryan Giggs are arguably the first two names you think of when someone refers to a 'one-club man', with both players spending their entire careers at AC Milan and Manchester United respectively.

On Monday night, Giggs broke Maldini’s record for appearances at a top European club, playing his 903rd official match for United 21 years after his first and he doesn’t look like stopping anytime soon, with his 1000th appearance surely somewhere on the horizon.

With players moving between clubs almost as often as they change boots, the cliche that 'one-club players are a dying breed' has become commonplace. Yet like most cliches, it does have an aura of realism to it, with both Maldini and Giggs likely to retain their respective club records until way beyond their eventual passing due to the interchanging nature of modern day football.

In the light of Giggs' recent achievement, get comfortable as Goal.com looks at the careers of two all-time greats...

Fact: Remains the only player to have played and scored in every Premier League season.

"I have cried twice watching a football player, the first was Roberto Baggio and the second was Ryan Giggs ." - Alessandro Del Piero

"Eric Cantona is a great player, but he's not as good as Ryan Giggs." - Johann Cruyff

Few clubs have seen the same amount of domestic and European success as Manchester United over the past 20 years or so, winning 12 Premier League titles, two Champions Leagues, a host of FA and League Cups, but people forget there was a significantly drier spell beforehand.

It took Sir Alex Ferguson a few years to turn United into title contenders and Giggs has been around since the very beginning of this successful period, making his debut as a 17-year-old in March 1991 before the Red Devils picked up their first Premier League triumph in 1993.

A stat that really shows the Welshman’s longevity is that he is the only player to have appeared and scored in every Premier League season and it is his career that seems to sum up post-1990 Manchester United.

In terms of defining moments, his first goal for the club couldn’t have come in a bigger fixture, as the then 17-year-old scored the winner against Manchester City in May 1991, while his 1999 FA Cup semi-final goal against Arsenal will be remembered as arguably his greatest, as he singlehandedly weaved through the Gunners’ defence before scoring and revealing his impossibly hairy chest as he celebrated.

The former Wales captain picked up his first Champions League winners medal the same year as he was a key part of United’s treble winning side, despite a comparatively injury-stricken season.

Although he did have his fair share of injuries when younger, his avoidance of serious long-term absences have meant he has managed to make at least 32 appearances every season since his debut season, but he doesn’t seem to be getting affected too much by fatigue, playing 27 times already this season.

After being a part of various historic events in United’s history, it was only fitting for the midfielder to be a key component of the side that would overtake Liverpool as the most successful in the English top-flight, as first they equalled the Reds’ 18 league titles, and then last year they broke the record, picking up their 19th.

"Zidane was brilliant without a doubt, but Paolo Maldini has been my favourite." - Sir Alex Ferguson

The name 'Maldini' was hardly an unknown one when 16-year-old Paolo made his debut for Milan back in 1985. The youngster was the son of Cesare Maldini, a Milan player in the 1950s and 60s, before coaching the side in the 70s, so the Italian already had an insight to a life focussed on football.

Similarly to Giggs, it didn’t take an awful long time before Maldini was a valued member of the first-team squad, making 27 Serie A appearances in his first full year, plus another 13 in other competitions.

Over the course of his 25-year long career, Maldini won seven league titles, with his first coming in the 1987-88 season, but it was the 1991-92 Scudetto-winning campaign that was perhaps the most emphatic, as Milan went the entire league season unbeaten, while the defensive quartet of Maldini, Franco Baresi, Mauro Tassotti and Alessandro Costacurta was becoming more imperious by the year.

Seven titles in 25 years is perhaps a little underwhelming, but few can equal the Italy legend when it comes to Champions League titles. He won two European Cups, one in 1988-89, and the other a year later, but he later added three Champions League trophies, with those coming in '94, 2003 and 2007.

Former Real Madrid wideman Francisco Gento won six European titles with the Spanish giants in the 50s and 60s, the only player to better Maldini, while both featured in eight finals, more than anyone else.

The former defender is often referred to by pundits, and fans, as the greatest player to never win the prestigious Ballon d’Or award, with his style of defending being quite remarkable. It has been suggested that he only averaged one tackle every two matches, allowing his fantastic positioning to dictate his game, effectively forcing people to rethink what they defined as a good defender.

Although his farewell at the San Siro back in 2009 was a little overshadowed by the chants and a banner in a section of the Curva Sud, he will undoubtedly be regarded an all-time great, with almost unrivalled success. But you just get a feeling that despite his achievements, Maldini will still feel bitter about losing the 2005 Champions League final to Liverpool in such dramatic fashion.