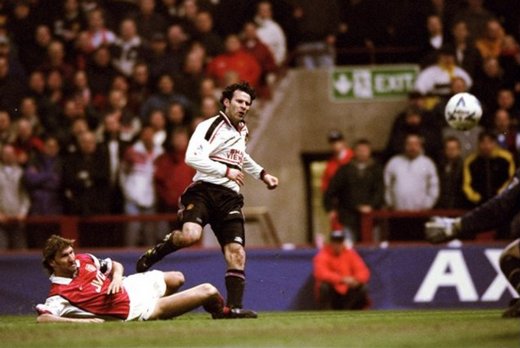 Ryan Giggs has faced Arsenal more often than any other team in his 21-year career as a Manchester United player.

The Welshman’s 47 appearances against the Gunners, across five different competitions, have yielded many great victories for the Reds – in games including the FA Cup (1999, 2004) and Champions League (2009) semi-finals. But it’s a measure of a true Manchester United legend when, before he can bask in such glories, he recalls the encounters where Arsenal had the upper hand – and metaphorically kicks himself.

“There’s one in there for the wrong reasons, where I missed an open goal,” Ryan told ManUtd.com, when we asked him to pick five memorable United-Arsenal matches.

“That one (FA Cup fifth round, 0-2, Old Trafford, 2003) has got to be in there. I seem to remember the disappointments more than the good games.”

When pressed for more positive recollections, Ryan picked out these four:

Arsenal 1 United 2, Villa Park, 14/04/1999
“Obviously the FA Cup semi-final replay in 1999 stands out – that was one of the great games, it really did have everything.” Everything including probably the best goal of Ryan’s career - his breathtaking solo winner as ten-men United reached the final.

Arsenal 2 United 4, Highbury, 01/02/2005
“I always enjoyed playing at Highbury and we got a few decent results down there. The 4-2 win when Sheasy (John O’Shea) chipped in our fourth goal was another great game. I also ‘scored’ but I think it was taken off me and recorded as an own-goal by Ashley Cole. I wasn’t happy about that!”

Arsenal 2 United 2, Highbury, 16/04/2003
“The one where I scored a header at Highbury to make it 2-2 was a really important game.” Had Ryan not equalised, the Gunners would have gone level on points with the Reds at the top of the table, with five remaining games to United’s four. As it is, Sir Alex’s men stayed out in front and were crowned champions 18 days later.

United 1 Arsenal 0, Old Trafford, 19/09/93
“There was another game at Old Trafford as well when Eric scored a brilliant free-kick, right in the top corner. I think that was back in 1993.” Ryan remembers the year correctly – the season in question was 1993/94, when the Reds went on to succeed Arsenal as FA Cup holders and complete the Double after retaining the long-awaited title.

Giggs is quick to acknowledge that great games often need great opponents. When asked to pick the three Arsenal players he most admires from the many he has faced since 1991, he chose an England stalwart and two of the league’s best-ever imports.

“You’d have to say Thierry Henry. He was one of the Premier League’s great players. He scored great goals, he had great physique and speed and on his day he was just unstoppable. You can add Dennis Bergkamp as well because he was a really intelligent player.

“Tony Adams is the other one. He was very tough to play against, especially at Highbury – you always knew you had to be at your best against that defence. It had so much experience.”