Giggs: There's an overall problem with the English national team and the culture has to change 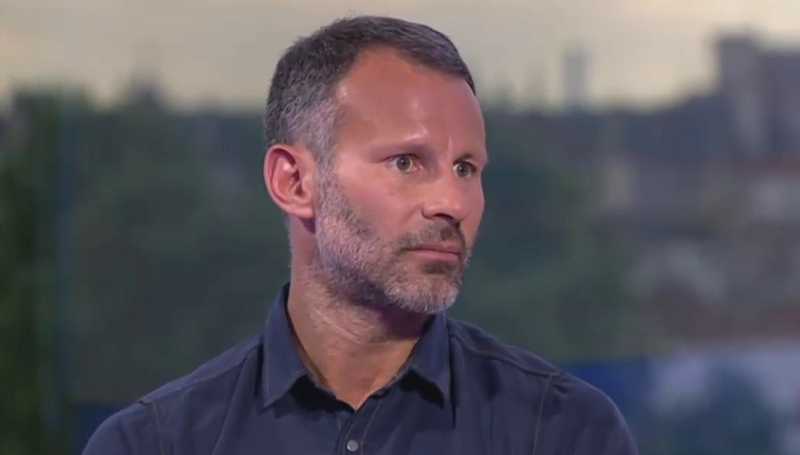 In the wake of England's embarrassing Euro 2016 exit at the hands of minnows Iceland, Carragher took aim at what he sees as 'The Academy Generation'.

On the young players coming through into the England side, Carragher wrote: 'We think we are making them men but actually we are creating babies. Life has been too easy. They have been pampered from a young age, had money thrown at them and, when things have gone wrong, they have been told it is never their fault.'

Giggs, asked for his thoughts on England as part of his role as a pundit with ITV, believes there is something fundamentally wrong with the English system which is holding them back from reaching the latter stages at major tournaments.

'I don't think you can question the character, but there's an overall problem with the English national team and the culture has to change to build a successful national team,' Giggs said.

'It is that whole washbag culture. I read a piece from Jamie Carragher and what he says is absolutely true. I didn't want to be famous, I wanted to be successful.

'Players now are rewarded before they even do anything - they have the nice cars, nice watches. They are robots, just robots. They're told what to do and there's no problem solving on the pitch.'

England's 2-1 humiliation at the hands of Iceland - a country with a population the size of Leicester - has gone down as one of the worst results in the country's history.

It has led to another root and branch review at the Football Association, while England boss Roy Hodgson quit in the immediate aftermath of the defeat.

Serious questions are being asked once again about how England can improve, with Giggs arguing the country's best young players need to play together more often in order to succeed.

'For a national team to be successful their best players have to play within their age group,' added the 42-year-old.

'There's a big question mark over that in England because the Premier League is so big.

'They have so much power. How can they release their best players for a summer youth tournament?

'But if the national team want to be successful, you have to do that. The nucleus of the current Welsh team have come through together.'

Following Hodgson's decision to stand down as England boss one of the biggest questions for the FA to answer is who should succeed him at the helm.

The likes of Arsene Wenger and Luiz Felipe Scolari have already been linked with the position but Giggs believes Hodgson's replacement can come from closer to home.

He believes Gareth Southgate, who led England Under-21's to success at the Toulon Tournament for the first time in 22 years this summer, could work alongside an older, more experienced figure.

'In 2014 they (the FA) had a vision of appointing from within - they should stick with that,' Giggs added.

'Bring someone in who can help Gareth Southgate over the next few years, someone who's had experience of tournament football and the Premier League.

'There are many names (Glenn) Hoddle, (Terry) Venables, (Sir Alex) Ferguson, (Louis) van Gaal - think outside the box. But have someone above to take the pressure off. Gareth has just won a tournament, so he has experience.'

While England continue soul-searching after their latest debacle, it's a different story for Giggs' home nation Wales.

Playing in their first major tournament since 1958, Chris Coleman's side topped Group B at Euro 2016 ahead of England and have made it through to a quarter-final with Belgium on Friday.

'The biggest compliment I can give this Wales side is that they are like a club side,' said Giggs, who won 64 international caps but never represented his country at a major tournament.

'That all comes down to one person - Chris Coleman. What he's done and what he's achieved is unbelievable.

'From the tragedy with Gary Speed and his first four or five games when he was under pressure, and I know he felt the pressure, to turn it around to where they are now is unbelievable.

'They have the team spirit that any successful team needs and with Gareth Bale in your side you've always got a chance.'

Wales beat Belgium in qualifying for France this summer and won't be afraid of Marc Wilmots' side.

The last-eight tie in Lille is set to be dominated by the two team's star individuals - Gareth Bale and Eden Hazard.

'Belgium are a team of talented individuals. They have talented players all around the pitch but Wales faced them in the qualifying group,' Giggs said.

'The difference between Bale and Hazard is that Bale doesn't need to play well to be the match winner. He could score a header or a free-kick.

'But if Hazard doesn't pay well, he doesn't really impact the game. Bale is just being himself. He's comfortable with his mates and he looks it on the pitch.

'He's at home playing in this Welsh team and it's brilliant because he's one of the few in the world that you just cant stop. On his day, there's nothing you can do.'