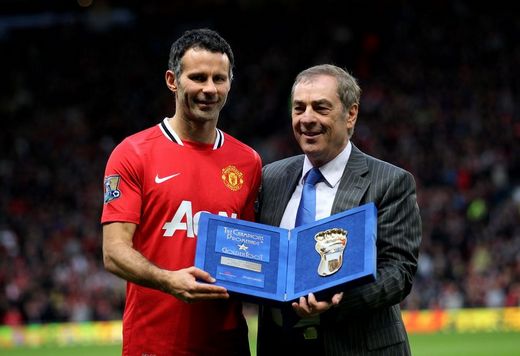 Ryan Giggs feels Paul Scholes should be a contender to replace him as the next Golden Foot winner, although his United colleague has not made the shortlist of 10 for the 2012 prize.

The Welshman was honoured with the accolade last term, as voted by fans across the globe, and announced the stars who are in the frame to also have their footprint on the Monte Carlo promenade. The award is presented for active players aged over 29 and they are only allowed to win it once.

"I think there's obviously lots of players who could probably receive this award," he stated in the video promoting the Golden Foot ceremony. "I think the one that springs to mind is probably Scholesy. He's still playing with the quality he's got. Obviously he retired and has come back. Since he's come back, he's playing as well as he has ever done.

"To do that at 37, to dictate games and to control the midfield like he does, I would say he was probably deserving of this award."

"I think Xavi is unfortunate to be in the same team as Lionel Messi and have Cristiano Ronaldo knocking about," he stated. "Otherwise, he would be probably have been the best player in the world in the last three or four years.

"Him and Scholes have been the best midfielders over the last 20 years quite easily. It could be hard to name one as it could be any of them but probably Xavi for his form over the last couple of years."